Taos Ski Valley is investing $300 million on updating and expanding the resort with improvements. This undated photo provided by Taos Ski Valley shows a skier ascending Kachina Peak at the ski resort located in Taos. The summit of Kachina Peak is 12,481 feet. Last year, the resort opened its long-awaited lift to the peak, which takes skiers to expert terrain that could previously only be accessed by those able to hike up.(Photo: Ryan Heffernan/Taos Ski Valley via AP)

TAOS — When it comes to skiing, New Mexico has long been the stepchild of sorts to its northern neighbor, Colorado, and its abundance of larger, snowier mountains and well-developed towns and resorts.

Still, Taos stands alone, a legend of sorts among even the hardiest of skiers.

Relatively small and off-the-beaten path, this has always been a true skiers’ mountain, renowned for its narrow, steep, challenging slopes, no-nonsense visitors and, best of all, the lack of long lift lines.

But the Taos resort was sold two years ago by the founding Blake family to Louis Bacon, a New York billionaire, skier and conservationist. And now Taos Ski Valley is investing some $300 million on updating and expanding the resort with improvements that have added to its appeal.

“We think that’s going to make it very attractive to people to come to Taos who haven’t come before. It’s a very different experience.”

Last year, Taos opened its long-awaited Kachina Peak lift, which takes skiers to expert terrain that could previously only be accessed by those willing (and able) to take off their skis and hike them to the top of the 12,481-foot (3,804-meter) summit.

Briner said the lift was immediately the most popular draw on the mountain, and skier visits were up about 10,000 last year.

And while some locals had been hesitant about sharing their hard-to-reach powder nirvana, Briner said the opening of the lift has actually thinned the crowds in other areas that can still only be hiked to, improving the skiing experience for everyone. 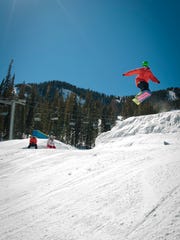 This undated photo provided by Taos Ski Valley shows a snowboarder catching air at the resort in Taos. Taos Ski Valley is investing $300 million in the resort to update and expand its facilities. Improvements include a new lift to Kachina Peak, enhanced snowmaking, and modernized hotel, dining and shopping options. (Photo: Thatcher Dorn/Taos Ski Valley via AP)

Town of Taos Tourism and Marketing Director Ana Karina Armijo says that after the lift opened, locals who used to ski the peak were thrilled to find hardly anyone else on the rest of mountain’s open terrain.

“Now we had all this powder to ourselves,” she said. “It was kind of cool in a way. We kind of gave up the peak in order to have all of the other terrain.”

With the Kachina lift open, the resort is now focusing on expanding its appeal. It has enhanced its snowmaking capabilities, added grooming equipment to help tame more of its expert-only runs, and is working to thin trees throughout the ski area.

Taos is also modernizing its hotel, dining and shopping options and working on new marketing messages to overcome its reputation as an experts-only mountain. Briner says that in fact, the mountain is “a great place for beginners.”

He notes that Taos has more blue and green terrain — the beginner and intermediate trails — than any other ski area in New Mexico. “Over half the mountain is green and blue,” Briner said, adding: “We think we are very family friendly. Part of that is our scale. A busy day at Taos is 3,000 skiers” — compared to four times that at Colorado’s big resorts. “The size gives us an intimacy, which we really think is attractive.” Next season, the resort will also open a new 82-room hotel, called The Blake, which will also host the ski and rental shop, wine and tapas bar, a health club, spa and underground parking.

“So it is a lot more than a hotel,” he said. “It is a cornerstone for the future of the base area.”

The resort is about 20 miles (32 kilometers) from the town of Taos, which with its art galleries and native history — including the Taos Pueblo, a UNESCO World Heritage site — is a tourism draw in and of itself. Armijo says the town is excited about the improvements and its expected tourism draw.

In addition to the upgrades, Taos Ski Valley is hoping for more snow than it’s had in years, thanks to a strong El Nino, which has already dumped more than two feet of snow on the mountain.

And it is a new member of the Mountain Collective group of mostly Western ski areas, which gives two days of free skiing to people who have season passes at 11 resorts that include Alta, Snowbird and Sun Valley in Utah, Jackson Hole in Wyoming, Aspen-Snowmass in Colorado, Mammoth in California and Whistler, Banff and Lake Louise in Canada, among others.

“We think that’s going to make it very attractive to people to come to Taos who haven’t come before,” Briner said. “It’s a very different experience.”

Go to skitaos.org or call 800-776-1111. Located in Taos, New Mexico. There is a small airport in Taos and a major airport about 135 miles away in Albuquerque.