Reboot 'Welcome to the Jungle' has exceeded the most optimistic revenue expectations and fueled sequel speculation.

Dwayne 'The Rock' Johnson sat down with USA TODAY's Bryan Alexander and shared the inspiration behind his 'Jumanji: Welcome to the Jungle' character, Dr. Smolder Bravestone, and how his own teenage past helped him master the role.

Movies didn't dare take on the force of Star Wars while The Force Awakens (2015) and Rogue One: A Star Wars Story (2016) were busily obliterating box-office records.

But this time, Star Wars: The Last Jedi has come up against the formidable Dwayne Johnson, Kevin Hart and Jumanji: Welcome to the Jungle.

Opening just five days after The Last Jedi, Jumanji shadowed Star Wars until — shockingly — the reboot of the 1995 Robin Williams movie took the top spot in its third weekend with $37.2 million.

More: Dwayne Johnson on his sizzle power in 'Jumanji': 'God delivered, I signed for it'

Still far behind in total box office ($245.6 million to Last Jedi’s $572.7 million, according to Monday's final figures), Jumanji has exceeded even the most giddily optimistic expectation.

“I knew Jumanji was going to be a hit,” says Scott Mendelson, box-office analyst for Forbes. “But I never thought it would be taking on The Last Jedi like this."

So how did Jumanji succeed against the holiday box-office Death Star?

It hits the right notes:  Director Jake Kasdan made an action film featuring high-schoolers transported into a deadly video game — all wrapped in the wish-fulfillment concept of a nerdy gamer who turns into 6-foot-4 avatar Dr. Smolder Bravestone (Johnson).

“Playing teenagers trapped in adult bodies, movies like Big,13 Going on 30 did it correctly," says Johnson. "If not done correctly, you can go off the rails quickly in terms of performance. ... But once I wrapped this movie, I was confident."

A cast with chemistry, appeal: Johnson and Hart, who previously proved their buddy-movie chops in 2016's hit Central Intelligence, are joined by Karen Gillan and a scene-stealing Jack Black (as a teenage beauty stuck in a middle-age man's body).

The combination of big stars and a story with broad reach made Jumanji "the perfect box-office beast," drawing all audience demographics, says Paul Dergarabedian, senior box-office analyst for comScore. "They even added Nick Jonas for more youngster appeal.”

It's the right season for family films: Between most schools taking an extended holiday break and the brutal weather, Jumanji (along with The Last Jedi) has served as a needed oasis for families.

"Families want comedy and that escapism Jumanji provides, especially when you’re freezing, as most of America is," says Jeff Bock, senior box-office analyst for Exhibitor Relations. "Jumanji is just going to continue riding through January. The biggest question is when Johnson can schedule a sequel, which will happen." 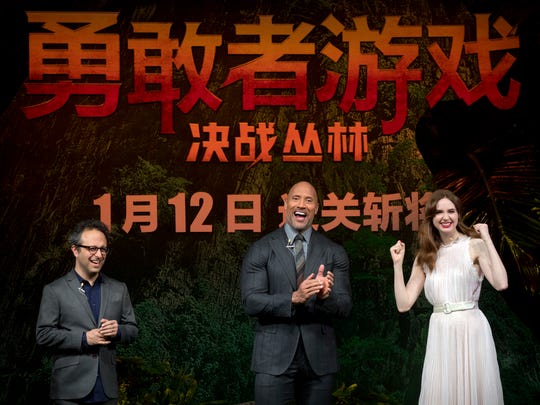 'Jumanji: Welcome to the Jungle' director Jake Kasdan, from left, Dwayne Johnson and Karen Gillan laugh during a news conference for the movie in Beijing. (Photo: Mark Schiefelbein/AP)

The zany promotion never stopped: Johnson has continually talked up Jumanji to his 12.4 million Twitter and 98.4 million Instagram followers, from the film's Hawaiian set to presentations at CinemaCon, the trade show for theater owners.

The cast has bantered through countless publicity appearances — including The Ellen DeGeneres Show and a media event where Black and Jonas shot an impromptu spoof music video for an unofficial Jumanji theme song.

More: The Rock explains why he wants to be president: 'To serve the people'

"Jumanji has just kept on going," says Dergarabedian. "It's the success story of 2018." 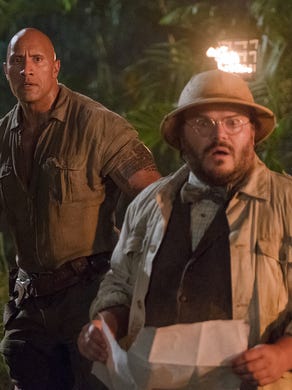 Robin Williams starred in the original 'Jumanji' in 1995, where participants were pulled into a magical board game. Sony
Fullscreen 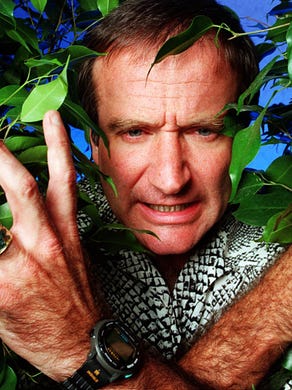 Williams poses with his trademark goofiness during a USA TODAY shoot for 'Jumanji' in 1995. The actor died in 2014. Robert Hanashiro, USA TODAY
Fullscreen