Aztec Church of Christ has established an American Heritage Girls troop as an alternative to Girl Scouts.

FARMINGTON — When Jody Dobbs’ daughter was 5 years old, the family searched for a Girl Scout troop for her.

But when they didn’t find a troop that was a good fit, they started an American Heritage Girls troop at the church where Jody Dobb’s husband, Jonathan, serves as a pastor.

“I just believe that was God opening the doors to a new area,” said Jody Dobbs, who serves as the troop’s shepherd.

The troop at Aztec Church of Christ was established about a year ago and has attracted families from as far away as Kirtland. It's the only American Heritage Girls troop in the Four Corners; the next nearest is in Rio Rancho. The organization's website lists five troops in the Rio Rancho and Albuquerque area, including Calvary Chapel of Rio Rancho, Foothills Fellowship, Our Lady of the Annunciation Parish, Church of the Incarnation and St. Thomas Aquinas Catholic Church.

American Heritage Girls began in 1995 when a mother in Ohio became disillusioned with the Girl Scouts of the USA and formed a Christ-based scouting program with fourth- and fifth-grade girls, according to the organization's website. Eventually, the program expanded to reach the same age group as Girl Scouts and grew to be a national organization.

“We incorporate the thread work of God into all aspects of what they do,” Jody Dobbs said.

That means including devotionals and prayer into activities and encouraging the girls not to be ashamed of or afraid to express their faith, Dobbs said.

Jonathan Dobbs said Aztec Church of Christ has discussed starting a Trail Life USA troop, but has not made formal plans to create one.

"We want to make sure we've got (American Heritage Girls) going real well," he said.

“We incorporate the thread work of God into all aspects of what they do.”

Like Girl Scouts, the troop is divided into age groups. The youngest group, called Pathfinders, is for kindergartners. Girls in first, second or third grade are known as Tenderhearts. The next age group – consisting of fourth, fifth and sixth graders – is Explorers. Pioneers are girls who are in seventh and eighth grade. Finally, high school students are called Patriots.

Jody Dobbs said the Aztec troop includes girls in all of the age groups.

While the troop does not tell cookies like Girl Scouts, the girls are selling chocolate this fall and plan to sell candles in the spring.

Stephanie Lewis, the leader of the Explorers, previously had her daughters in a Girl Scout troop. She said that while the groups are similar, she has noticed more outdoor skill-related badges in the American Heritage Girl program. For example, Jody Dobbs said, troop leaders hope to take the girls on a trip to find fossils in the Jemez Mountains next year along with one of the Rio Rancho troops.

"My favorite thing is just seeing them blossom and grow," Dobbs said about the program.

Find a troop: To find a troop, go to americanheritagegirls.org. 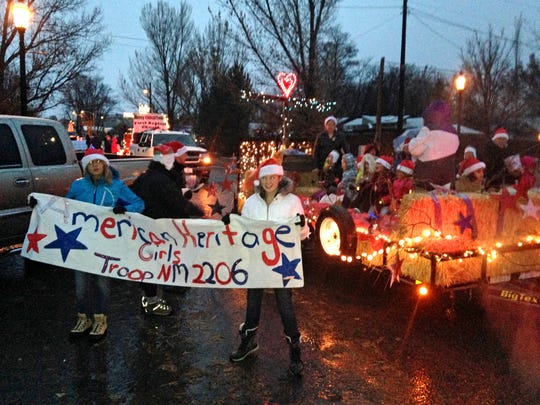