FARMINGTON — About a month ago, the New Mexico Department of Game and Fish released five tagged trout into... 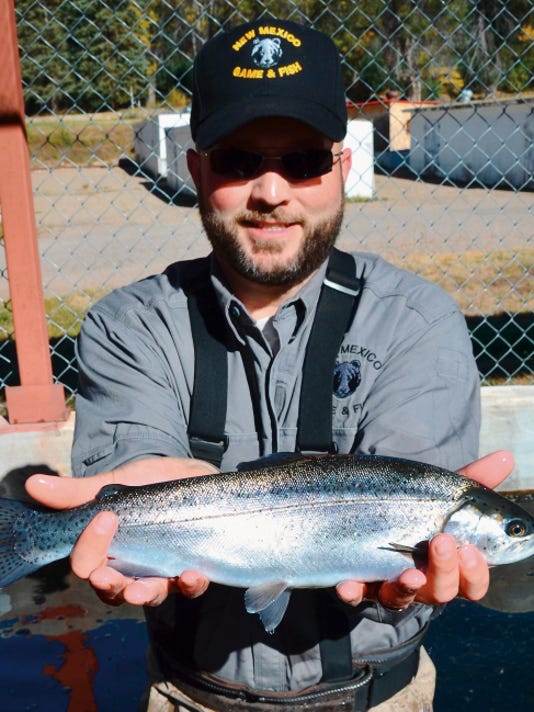 Courtesy of New Mexico Department of Game and Fish Scott Bernard shows off a triploid rainbow trout at a hatchery.(Photo: )

FARMINGTON — About a month ago, the New Mexico Department of Game and Fish released five tagged trout into Farmington Lake, and if anyone catches one of those fish, they can win $100.

However, as of Tuesday, not a single one of the tagged fish had been caught.

"Those trout are being a little sneaky," said Tonya Stinson, the executive director of the Farmington Convention and Visitor's Bureau.

State officials approached the bureau about the tagged fish contest during the New Mexico Department of Game and Fish's annual meeting this spring in Farmington.

"We thought it was a great idea," Stinson said.

The contest has been held in other cities, including Ruidoso. But tagging trout is not the only way that the department has been adding an element of surprise to the New Mexico fishing experience.

Many ponds, rivers and lakes in northern New Mexico have been stocked with larger trout ranging from 16 to 18 inches in length.

Last week, the department stocked Burns Lake, near Chama, with 360 fish. About 80 of those fish were large trout.

Children often take advantage of the fishing there.

"There's a good potential that they could catch one of these trout," said Karl Moffatt, a department spokesman.

The large fish are triploid rainbow trout, which means they are sterile.

While it is not known for sure why the triploid trout grow so big, Moffatt said not being able to reproduce could have something to do with it.

"It doesn't spend as much energy reproducing and trying to reproduce," Moffatt said.

The department's hatcheries switched to raising triploid rainbows to prevent them from hybridizing with the Rio Grande cutthroat trout, which has been a candidate for the endangered species list.

The cutthroat are not found in the local rivers, however the department still releases triploid trout into the San Juan River, which Moffatt said is one of the top 10 fisheries in the west.

"The visitation there is through the roof," he said.

And, while the rainbow trout the department are stocking in the quality waters of the San Juan River are not able to reproduce, there is a healthy population of brown trout that can.

While the department has been stocking the larger triploid rainbow trout in other areas of northern New Mexico, Moffatt said there haven't been any recent releases of the large fish into local waters because their temperatures are too high.

However, the large trout were stocked in two Aztec ponds, including Tiger Pond, during the spring and they will continue to be stocked in local waters in the future.

"We fully intend to continue the program," Moffatt said.