County seeking $100,000 to study problems in subdivision where septic tanks are too...

County seeking $100,000 to study problems in subdivision where septic tanks are too... 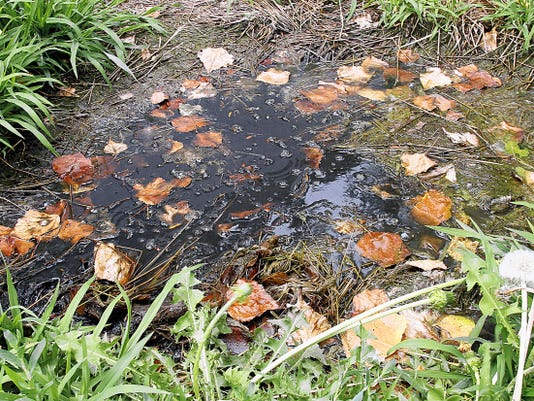 Sewage overflows from a septic tank Thursday at a property in the Totah Subdivision south of Farmington.(Photo: Jon Austria &#8212; The Daily Times)Buy Photo

SAN JUAN COUNTY — Property owners and septic pumpers say people who live in the Totah Subdivision south of Farmington could be drinking well water contaminated with sewage from their leaking septic tanks, and San Juan County is looking for funding to investigate that claim.

On Wednesday, Don Moats, a septic pumper who owns D.J.'s Backhoe Service, pulled into a gravel driveway off an alley in the subdivision where weeds grew as tall as the hood of his black Chrysler SUV. He parked, stepped out and walked around.

"Can you smell it?" he said, gripping a chain-link fence.

He leaned into the fence and pointed to two puddles. Tall grass nearly obscured them.

"See that white building? That's their well," he said, walking around the fence and into the yard. "Forty feet away."

A line of dark grass arched from the puddles across the yard, under a fence and to the well house. Usually, grass isn't that green unless it's feeding off sewage, Moats said, standing now by the puddles above the septic tank, looking down.

"By the looks of it, nobody's ever pumped it because the grass is still there," he said of the septic tank.

In February, officials released a two-year study of the San Juan and Animas rivers in the county that detected significant levels of a bacteria indicating the presence of human feces in those waters. It also found high levels of bacteria associated with animal waste.

The San Juan Watershed Group and San Juan Soil and Water Conservation District worked together on the study, and they're now trying to determine what's polluting the rivers. They've formed a working group with the New Mexico Environment Department, the county and the cities of Farmington and Aztec to discuss the issue.

Some officials have said illegal dumping could be contributing to the pollution, and others have said failing septic systems are contaminating the rivers. Septic systems in Lee Acres and Wild Horse Valley are malfunctioning, and they may threaten the public's health, according to preliminary engineering reports on the areas.

Those kinds of reports are what the county is trying to fund for the Totah Subdivision, which has 111 addresses on only 39.5 acres, according to county documents. It was built in the 1950s and early 1960s before state laws regulating subdivision septic tanks were enacted, according to Norman Norvelle, a former director of the environment department's Farmington field office, as well as a registered sanitarian who holds the highest levels of water and wastewater certifications in the state.

Norvelle said septic systems nowadays are not permitted unless they're installed on at least three-quarters of an acre.

He said septic systems should also be at least 100 feet from a well.

That's not the case in the Totah Subdivision, he said. There, he said, the health of the residents concerns him more than potential river pollution.

A septic tank removes hair, grease and other solids from sewage, which then seeps through a leach field before it filters into the soil. This system works adequately when it's far from groundwater or wells, he said. But in the Totah Subdivision, the groundwater is high because the San Juan River is hundreds of feet away, and wells are separated only 10 or 20 feet from septic tanks, he said.

"I don't think they realize how serious it is," he said of the subdivision's residents. "What you need is somebody that is a medical doctor, not somebody that is with the state of New Mexico, for Christ sake," to declare it an emergency, he said.

The environment department hasn't received any complaints about the subdivision, department spokeswoman Allison Scott Majure said on Friday. The agency can't sent staff members knocking on doors to inspect septic systems without a reason, she said.

"We operate on complaints," she said.

Although they live in Kirtland, Margaret Clements, 79, and her husband, Archie Holmes, 75, own five lots in the Totah Subdivision. They bought them in 1991 and now rent them out. They have spent $9,000 to upgrade one of their septic systems, but for most of the neighborhood, which is low income, that's not feasible, Clements said.

The best thing that could happen, Holmes said, is for Farmington to annex the subdivision. The city's boundaries are at the corner of East Willow Street and South Butler Avenue, less than 1,000 feet away. But, he said, he thinks neighborhood is too poor and the crime rate is too high for that to happen.

To start the process of annexation, owners of more than half of the property would have to sign a petition for the City Council to consider the idea, said Farmington Community Development Director Mary Holton. Farmington can't spend city money in the county, but if it included the subdivision within its boundaries, it could fund water and sewer line extensions. Holton said Friday that she had not seen an annexation petition from the subdivision.

Clements said the couple pays Moats to pump the upgraded septic tank two to four times a year, but it's expensive. She's skeptical other subdivision residents pump theirs that frequently, and that could mean their tanks are leaking, she said.

"This has been a big, ongoing problem, and it's getting worse because the ground is getting more saturated," she said.

On Wednesday, Moats, who installed the couple's updated septic system, turned out of the gravel alley with the tall weeds and continued through the subdivision down Concho Avenue. He is also an advocate for water or sewer lines in the subdivision, he said. A water line would ensure residents aren't drinking contaminated water, and a sewer line would eliminate the potential contamination, he said.

He slowed as he drove by the corner of a driveway that was dark from something wet.

The surface of the mud was speckled green.

He drove past two homes connected to a single septic tank — which is illegal, "but what the hell can you do?" — and then he turned onto Silver Street, where he passed a garden growing corn.

"Look," he said. The corn in the field was chest high. "They got their garden, which is good. You can eat from the top," he said, "but not the bottom."