A performance of "Roller Coaster" highlights a concert by the San Juan College Symphonic Band on Friday.

So he was more than a little surprised when Teun Fetz, conductor of the San Juan College Symphonic Band, came to him several months ago and asked if he'd be interested in joining a trumpet trio in performing a piece called "Roller Coaster" by Canadian composer Johnny Cowell. Hesse began researching Cowell's work and found that at one time, he had been a member of the Toronto Symphony Band, right across Lake Ontario from Rochester.

And yet Hesse had to admit he was unfamiliar with "Roller Coaster."

Fetz said the piece is short, only two and a half to three minutes in length. He said Cowell wrote it for the famed Canadian Brass, a group widely regarded as one of the world's top brass ensembles and known for its unique blend of virtuosity and wit.

"It really drives," he said. "The biggest thing is, it's fun for the band."

Hesse, Anderson and Silverman will carry the load on the tune, Fetz said, explaining that the composition requires the band to simply provide the foundation.

"I think it's a good learning experience," he said. "They learn how to balance an accompaniment. Of course, the challenge is getting the parts lined up."

While this will be the first time that Hesse, Anderson and Silverman have performed as a trio, Hesse said they have played together before in different settings. He expects them to have no trouble finding common ground, even if their rehearsal time has been limited.

"We're in and out of there in two and a half minutes, so that part's enjoyable to us," he said. "It's a piece you want to do as fast as the group can do it."

"There are a lot of different ranges of styles and compositions," Fetz said.

The program also features a performance of composer Eric Rath's "Escape Artist" featuring the band's percussion ensemble. The band's previous concert focused heavily on the woodwinds section, and Fetz said he wanted to do something different this time.

"For this performance, the percussionists wanted their own thing," he said. "And because I'm a percussionist, I wanted to give them their due."

Fetz said he chose "Escape Artist" because he considered it accessible enough for his percussionists to pull off while at the same time being complex enough to allow them to display their skills.

"This will showcase the percussion ensemble since they usually get buried in back (of the stage)," he said. 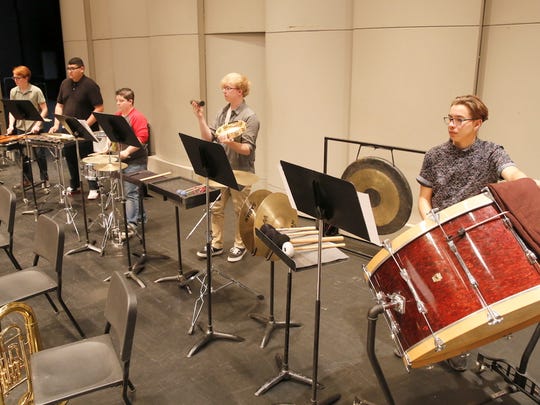 The percussion ensemble of the San Juan College Symphonic Band will be spotlighted on a performance of composer Eric Rath's "Escape Artist" during tonight's concert. (Photo: Mike Easterling/The Daily Times)