Farmington resident Sherwood "Woody" Moore has been inducted into a music hall of fame in South Dakota.

Sherwood "Woody" Moore displays one of his bass guitars in the living room of his Farmington home. Mike Easterling/The Daily Times
Fullscreen

The Bird Dogs sported stage outfits sewn by the mother of one of the members. Longtime Farmington resident Sherwood "Woody" Moore is pictured second from right, while Lee Halvorsen is at top. Courtesy photo
Fullscreen 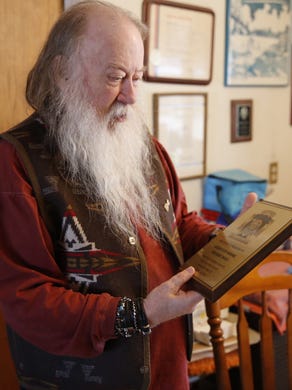 Despite breaking up in 1967, the Bird Dogs made a lasting impression on the popular music scene in South Dakota. Sherwood "Woody" Moore is pictured at bottom. Courtesy photo
Fullscreen 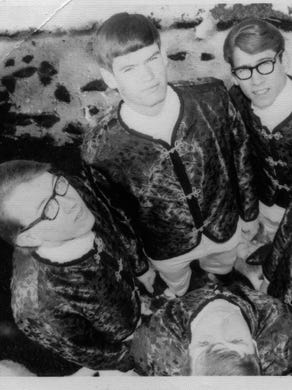 The Bird Dogs were a Huron, S.D.-based rock band in the early and middle 1960s that performed extensively throughout the northern Great Plains. Sherwood "Woody" Moore is pictured at left. Courtesy photo
Fullscreen

Sherwood "Woody" Moore was inducted into the South Dakota Rock and Roll Association in 2015 for his work in the 1960s with the band the Bird Dogs. Mike Easterling/The Daily Times
Fullscreen 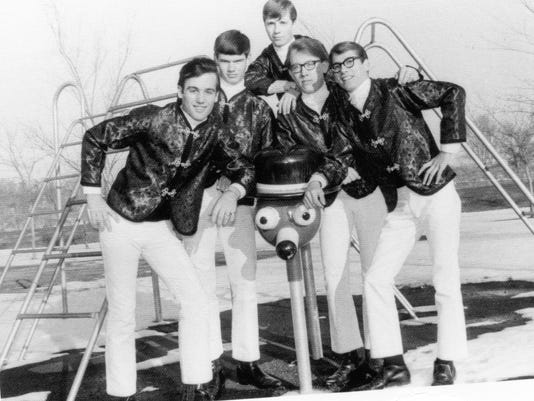 The Bird Dogs sported stage outfits sewn by the mother of one of the members. Longtime Farmington resident Sherwood "Woody" Moore is pictured second from right, while Lee Halvorsen is at top.(Photo: Courtesy photo)

FARMINGTON — Huron, S.D., may not have been the center of the rock 'n' roll universe in the 1960s — or any other time, for that matter.

But for a longtime Farmington resident, it was still a little slice of musical heaven.

Sherwood "Woody" Moore, a one-time Farmington police officer and now-retired Navajo Mine employee, was the bass player for the Bird Dogs, a rock group that enjoyed a highly successful run around the Huron area from 1962 to 1967. Moore thoroughly enjoyed that experience, but he acknowledges those years were only a distant memory until he received a package in the mail in February from another member of the group, Lee Halvorsen.

Halvorsen, whom Moore had not spoken to since the members of the Bird Dogs went their separate ways, informed him that the group had been inducted two years earlier into the South Dakota Rock and Roll Association's Hall of Fame. The package included a plaque commemorating Moore's induction as a member of the band.

"Before, I never gave it a thought," Moore said earlier this week in the living room of his home in Farmington, where he has lived since 1970. "It's so far from here to (South Dakota). But now that I've talked to Lee, we have so many great memories together." 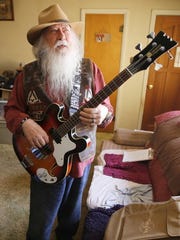 Sherwood "Woody" Moore displays one of his bass guitars in the living room of his Farmington home. (Photo: Mike Easterling/The Daily Times)

His induction with the Bird Dogs actually represented the second time Moore had been inducted into the SDRRA Hall of Fame, as he had gone in as a member of another band, the Torres, in 2011. Moore was playing with that group in 1962 when Halvorsen and his buddies Dennis Kuper and Terry Koch decided to try to woo him away for their own fledgling band.

Their sales pitch worked, and when drummer Joe Gibson also signed on, the five-piece outfit started calling itself the Bird Dogs and went to work. Moore, a natural hustler even as a high school senior, said he took on the duties of managing the group.

He had only question for his bandmates.

"I said, 'How busy do you want to be?'" Moore said, recalling his approach to booking shows. "I didn't mind getting on the phone. Huron was a farming community, but there were a bunch of surrounding little towns, and every one of them had a gym — and we played every weekend."

Despite his managerial duties, Moore was no dictator. He recalls that everyone in the band got along exceptionally well, and duties were widely shared. 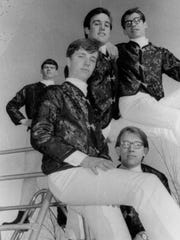 Despite breaking up in 1967, the Bird Dogs made a lasting impression on the popular music scene in South Dakota. Sherwood "Woody" Moore is pictured at bottom. (Photo: Courtesy photo)

"We always accepted responsibilities in a democratic way," he said.

Halvorsen remembered Moore as an easygoing type, a bassist who could easily lose himself in the groove he was helping create. Moore didn't dispute that characterization.

"I was pretty laid back," he said, smiling. "I didn't get too excited about too many things."

But from the start, the Bird Dogs aspired to more than local fame. Halvorsen — now a New Jersey resident who became an Air Force fighter pilot, lawyer, chef and photographer after he left South Dakota — said the band quickly hit the regional circuit, playing in various neighboring states throughout the northern Great Plains. The group performed in groovy, matching blue-and-black brocade jackets sewn by Kuper's mother with white lace dickies. They also sported mop-top haircuts and flamboyant white bell bottoms that had to be ordered by mail, Halvorsen said.

"In South Dakota, they didn't have bell-bottom pants," he said sheepishly.

The Bird Dogs traveled in a blue 1963 Ford and hauled their gear in a homemade trailer built by Moore's uncle, sometimes traveling hundreds of miles across state lines to perform, even though some members of the band were as young as 15. 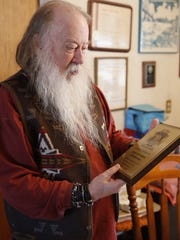 "The thing of it is, we never got in any trouble, so we always had our parents' trust," Moore said.

That didn’t keep the Bird Dogs from encountering problems from time to time. Halvorsen recalled how the group was headed to a gig in Spencer, Iowa, one day, when the trailer hit a pothole and was knocked loose from the vehicle, winding up on its side in a ditch. Band members despaired, fearing that all their instruments, amps and sound equipment had been destroyed.

"But it was so tightly packed that the only thing that was hurt was there was a hole from a screw in the side of my amp," Halvorsen said.

The Bird Dogs got a local welder to piece the trailer — which Halvorsen affectionately refers to as "the bandwagon" — back together, and the band made it to the show on time.

The group wasn't quite as lucky on another trip, this time when it was scheduled to play a show at one of the top venues in northern Minnesota. The Bird Dogs had played another show far away the night before, and they were running late even before a downpour threatened to delay them further. 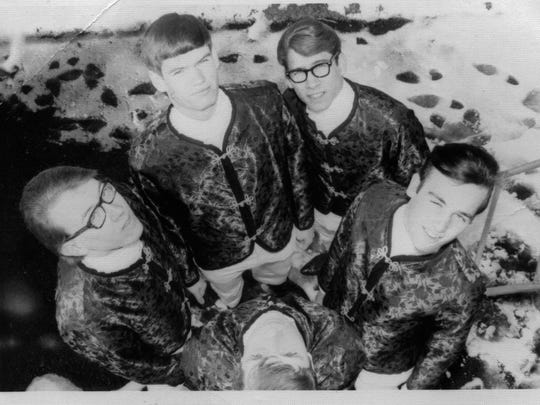 The Bird Dogs were a Huron, S.D.-based rock band in the early and middle 1960s that performed extensively throughout the northern Great Plains. Sherwood "Woody" Moore is pictured at left. (Photo: Courtesy photo)

Desperate to make up for lost time, someone in the band identified a "shortcut" on the map and turned down a dirt road. It wasn't long before the blue Ford was mired in mud above its hubcaps, leaving the vehicle stuck with the clock still ticking.

Halvorsen recalled how two members of the band slogged their way to a nearby farmhouse, persuading the owner to come pull the vehicle and trailer out with his tractor. The Bird Dogs eventually made it to the gig only half an hour late, but they were forced to play in mud-drenched clothes.

There were hundreds of people at the show, and there was more than a little grumbling about the group's tardiness, "but that ended after the first two or three songs," Halvorsen said, noting the group had a gift for winning over audiences.

That talent was put to good use in 1966, when the Bird Dogs took part in a two-day battle of the bands that featured 36 acts from across the Midwest. The competition was held in a huge auditorium, a refurbished National Guard armory, and the participating bands took turns performing 20-minute sets on three sides of the facility at floor level.

Given the fact that there was no stage, and the group would have only a limited amount of time to make an impression on the audience, the Bird Dogs — a show band modeled after the popular 1960s act Paul Revere and the Raiders — decided to go for broke. 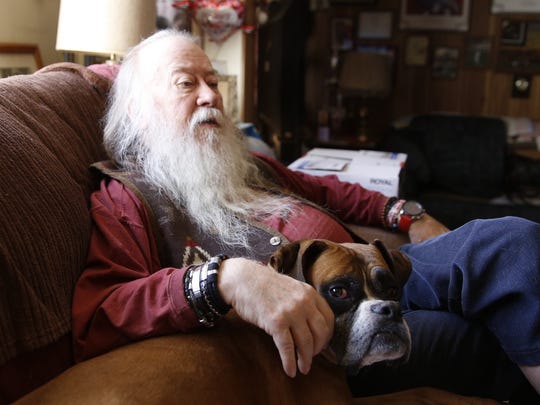 "Nobody could see us," Halvorsen said. "So what we did was, we got on top of our amplifiers and did our dance routine, which was a real balancing act. We won, and I think it was partly because of our derring-do."

The band was rewarded with studio time at the Iowa Great Lakes Recording Company and wound up cutting a pair of singles — an original tune penned by Kuper called "Shoppin' Around" and a cover of Bobby Sharp's "Unchain My Heart." Halvorsen said only two known copies of the record remain in existence.

That proved to be the high-water mark for the band. The Bird Dogs would disband in 1967, as its members scattered to finish college, fight in the Vietnam War, get married and start a family or pursue a career. Moore wound up graduating from Huron State University, where he also played varsity baseball, and joined his family in a move to Farmington in 1970.

"She's a real special person," Moore said of his wife of nearly a half century. "Without her, I don't know where I'd be." 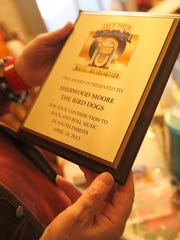 Sherwood "Woody" Moore was inducted into the South Dakota Rock and Roll Association in 2015 for his work in the 1960s with the band the Bird Dogs. (Photo: Mike Easterling/The Daily Times)

Moore found other things to dominate his time the way rock 'n' roll once had, playing and coaching baseball and softball in the Farmington area for many years. But music has remained an important part of his life, even as he has grown older. He estimated he's seen 500 concerts in the last 10 years alone, and a room in his house is stuffed with memorabilia, CDs, magazines, books and other items related to his favorite bands and artists.

Near the top of his list is the iconic Texas rock trio ZZ Top. Moore boasts that he has seen the group perform 46 times, hardly surprising, given his fondness for facial hair — a trait that mirrors the well-known anti-shaving preferences of ZZ Top bassist Dusty Hill and guitarist Billy Gibbons.

Moore also likes to tell stories about being invited aboard the tour bus of blues legend B.B. King or chatting up Los Lobos frontman David Hidalgo backstage in Durango, Colo.

While he hasn't played music in many years, Moore maintains an extensive collection of instruments. He hasn't gotten carried away about his recent brush with semi-fame, but it has gotten him to thinking about picking up the bass once again and trying to recreate some of the old magic.

"I'm hoping to get it in gear," he said. "I really don't want to be in a band, but I wouldn't mind being in a trio. I'm just going to have to wait and see where it takes me."