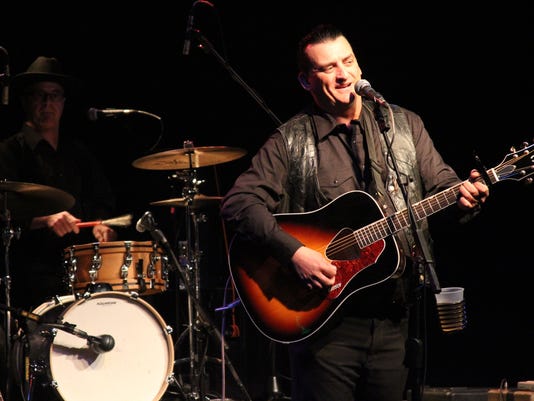 FARMINGTON — Cash’d Out, a San Diego-based Johnny Cash tribute band, is the first, and only, group that frontman Doug Benson has ever played in. He started the band on a lark in 2005 after losing his job as a fiber optics technician with a California cable TV company and realized within a couple of years he had captured lightning in a bottle.

Benson is aware of how unlikely his story is. He says he only started singing in the first place to help keep himself awake on those long nights when he was out on the road by himself doing fiber optics testing. Benson owned a collection of cut-rate Cash cassette tapes he had purchased in gas stations during his travels, and he found he liked to sing along with them when he was on the highway.

Benson would drive from job to job and small town to small town in California during the day, then check into a dreary motel at night. When he was able to enjoy a rare night off, rather than kill an evening in front of the television set in yet another nondescript room, he started making a habit of scouting out local bars in search of one that was having a karaoke night. Benson eventually worked up the nerve to put his name on the sign-up sheet, then took to the stage and belted out a version of a Cash standard like “Folsom Prison Blues” or “Ring of Fire.”

“I didn’t know anybody, so I didn’t care if I embarrassed myself,” he said, recalling his introduction to show business during a phone interview last week from San Diego. “I just wanted to sing Johnny Cash songs.”

To his surprise, Benson — who performs with Cash’d Out Tuesday, Jan. 24 in Durango, Colo. — found he had a knack for capturing the fabled Man in Black’s vocal essence. Unfailingly, he was the star of those karaoke nights, enjoying plentiful cheers and slaps on the back as he finished singing and made his way back to his seat at the end of the bar.

“People would buy me drinks and say, ‘What are you doing here? You should be in Las Vegas,’” Benson said, his recounting of that period in his life almost echoing a line from Billy Joel’s “Piano Man.”

It didn’t take Benson long to begin asking himself the same question, especially when he got laid off from his job. While searching for another one, he decided to take the plunge and put together a band in San Diego that played nothing but songs by Cash, even though his live music experience was, well, extremely limited.

Benson bought himself a guitar and taught himself a few chords, then began recruiting other members of the band by placing a classified ad in the back of the San Diego Reader, the local alt-weekly. In the ad, Benson explained that he was specifically looking for a guitarist who could play like Luther Perkins, a member of the Tennessee Three, Cash’s longtime backup band.

A local picker named Kevin Manuel responded to the ad, Benson said, and the two arranged to meet so Benson could interview him. Within a few minutes, he said, Manuel had turned the tables and was the one doing the interviewing.

Despite that less-than-promising beginning, the two made a connection, and Cash’d Out was born in late 2004, barely a year after the artist himself had died – and a year before the film “Walk the Line” was released, which helped drive public interest in Cash’s music to new heights.

Benson’s initial expectations for the project were not lofty.

“I thought we’d play once or twice a month for some of my buddies in a dive bar while they drank whiskey,” he said. “But it was pretty evident soon after we started playing it was going to be something I had never dreamed of.”

The group quickly outgrew the San Diego’s bar scene and developed a regional base. Benson had found another regular job, one that often required him to work weekends. But the unexpected popularity of Cash’d Out it was making it harder and harder to manage his time.

After its modest origin in San Diego, Cash'd Out has developed a nationwide audience, and front man Doug Benson hopes to take the band to Europe this year. (Photo: Courtesy photo)

There’s been no looking back. Cash’d Out now plays all over the United States, performing before as many as 3,000 people, and Benson said he’d like to take the group to Europe this year. The enduring appeal of Cash’s music shows no sign of fading nearly a decade and a half after his demise, and Benson has a quick explanation for that.

“It’s just honest, easy to understand,” he said. “You can understand his words and lyrics, but they’re still pretty complicated. You know, Waylon Jennings used to say (about Cash), ‘It’s so hard to write down so few words and get some much out of ‘em.’”

That making-it-sound-simple quality is common to many great songwriters, but Cash combined it with a style that made him an icon. Benson said it’s impossible to distinguish how much of Cash’s greatness was determined by his memorable material and how much was a product of his one-of-a-kind personality and his insistence on conducting his career his way.

Cash’d Out makes a point of billing itself as a tribute band, not a band of impersonators. The goal, Benson said, is to perform the material as closely to the original versions as possible, and the singer has a gift for mimicking Cash’s distinctive voice — a quality he unwittingly honed as a snotty teenager when he and a buddy used to amuse themselves by making prank calls and disguising their voice.

But that’s where the role playing stops. Benson doesn’t bear any particular resemblance to Cash and makes no effort to, aside from the requisite all-black clothing. He said the idea of taking on Cash’s persona on stage is anathema to him.

“The difference between Cash’d Out and all the other Johnny Cash tribute bands is, I’ve never said, ‘Hello, I’m Johnny Cash,’” he said, referring to the singer’s trademark greeting to audiences. “I refuse to do it. It’s not about me. We’re telling a story about Johnny. We’re trying to make it as close the real Johnny Cash as we can, as far as the music. But I never try to put myself into the first person.”

“He was saying, ‘I did this, I did that,’” Benson said, explaining that he felt like that approach seemed disrespectful. “I’ve never really been an impersonator, in my mind.”

Doug Benson believes the key to Johnny Cash's enduring popularity is the honesty of his songs and the fact that they were easy to understand. (Photo: Courtesy photo)

That hasn’t stopped a lot of people from marveling over Benson’s vocal resemblance to the genuine article. Bill Miller — co-founder of the Johnny Cash Museum, johnnycash.com and johnnycashradio.com, and a longtime friend of the singer — is among the group’s biggest fans.

“He told me he could tell just hearing us we weren’t doing this to make a buck off Johnny’s name,” Benson said. “I’m really interested in Johnny and trying to keep his tradition alive. (Miller) introduced us one time, and he said, ‘Some people are impressionists — these guys leave an impression.’

Other people have remarked on how much Benson’s physical mannerisms resemble the way Cash held himself on stage, particularly the way he cocks his neck. Benson insists that’s not something he ever practiced.

“The reason I do it is it helps to get my throat in the right position to make that noise,” he said. “I don’t know if that’s why Johnny did it. But it’s why I do it.”

Benson does pepper Cash’d Out performances with plenty of stories about the singer. Even so, he said he didn’t do a great deal of research about Cash before he put the band together, other than reading his autobiography and a couple of other books and watching some documentaries.

“I’m not the Johnny Cash go-to guy to tell you what he did why he did it,” Benson said. “I’m not a historian of his life.”

But he believes his presentation has gotten much better with experience. The band now has more than 150 Cash songs in its repertoire, though it started out focusing on material from the recordings he made with Sun Records early in his career. A typical show will consist of most of Cash’s hits, he said, but Benson also likes to mix in some of the singer’s more obscure tunes, such as “Wide Open Road.”

“That’s one of my favorites,” he said. “We’ll put that one in from time to time. The set list kind of stays the same, but if someone hollers one out in the audience, we can usually do it.”

One of Benson’s great regrets is that he never took the time to see Cash perform before his death.

“He was in the neighborhood one time, and I didn’t go see him, and I should have,” Benson said. “Of course, that was way before the band got started. And I have seen (Cash contemporaries) Willie and Merle Haggard and Kris Kristofferson, but I always kick myself in the butt for not going to see Johnny.”

Benson has been performing Cash’s songs for so long now, he’s built a sense of intimacy with them, even as he makes a point of maintaining his distance from the Man in Black’s persona. But he more than understands what some people are feeling when they approach him after a show wearing their emotions on their sleeve. It seems one of Cash’s greatest gifts was inspiring a sense of loyalty in his fans that time has not dulled.

“Some of them have tears in their eyes,” Benson said. “And they say, ‘You don’t know the memories you brought back.’”

Tickets: $18 in advance and $20 the day of the show at animascitytheatre.com