Thomas Heuser makes his debut as the music director of the San Juan Symphony this weekend.

Music Director Thomas Heuser begins his tenure with the San Juan Symphony by leading the orchestra in its season-opening "Fresh Faces and Firebird" concerts this weekend in Farmington and Durango, Colo.(Photo: Courtesy photo)

FARMINGTON — When Thomas Heuser, the new music director of the San Juan Symphony, says he hopes music fans in the area will come to regard the orchestra’s performances as something special, he has a clear idea of what that means.

“I want the community to see these as once-in-a-lifetime events every time,” he said. “These are ‘babysitter-worthy’ events where people can plan to make an evening or an afternoon of it.”

And that doesn’t just apply to the symphony’s current fan base, Heuser emphasized. He’s hoping to attract new fans to the orchestra, especially those who have never attended a classical music concert, by making it as accessible as possible.

“For those first-time people, we want to really reach out to them and get them to be part of the symphony family,” he said.

As part of that effort, Heuser will be conducting a pre-concert talk at 2 p.m. on Sunday, Oct. 9 at the Henderson Fine Arts Center Performance Hall on the San Juan College campus. He said he plans to speak for approximately 30 minutes on his new role as the symphony’s leader, leaving plenty of time for everyone to get to their seat for the orchestra’s season-opening program.

The theme of that program, “Fresh Faces and Firebird,” is a nod to Heuser’s presence, as well as a reflection of the material that will be featured, namely Stravinsky’s “Firebird Suite,” which serves as the concert’s finale. The program features one piece each from a composer from the 18th, 19th, 20th and 21st centuries, Hesuer said, including Wolfgang Amadeus Mozart, Antonin Dvorak and Clint Needham.

The featured soloist for the program will be M. Brent Williams, who serves as the symphony’s concert master. A faculty member at Fort Lewis College, Williams will be spotlighted on the violin during the orchestra’s performance of Dvorak’s “Romance.” 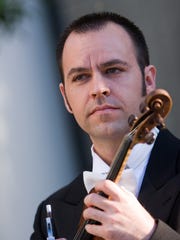 Concert Master M. Brent Williams will be the featured soloist when the San Juan Symphony opens its 31st season this weekend with performances in Farmington and Durango, Colo. (Photo: Courtesy photo)

The orchestra’s new director said the impression he’s gotten from the patrons he’s spoken to is that they are excited about opening a new chapter in the symphony’s history, and he looks forward to highlighting the musicians who make up the organization during his first season.

This will not be Heuser’s first time to lead the symphony. He was the guest conductor during its “Pictures and Visions” concerts in Farmington and Durango, Colo., in November, which effectively served as his audition for the vacant music director position. Heuser impressed the symphony board during that appearance, leading the organization to offer him the position late last winter.

Heuser relocated with his wife this summer from Oakland to Durango, and, as a self-described avid outdoorsman, he was delighted to report that he already has hauled in his first rainbow trout.

Heuser will continue to serve as the music director of the Idaho Falls (Idaho) Symphony, a position he has held for five years.

When he accepted the job with the San Juan Symphony, Heuser said he viewed the fact that the orchestra serves two communities as one of the most attractive elements about the position. He doubled down on that assertion last week as he prepared for the season opener.

“It’s important to us to keep building that bridge between the two communities, and that’s what the orchestra is all about,” he said.

What: “Fresh Faces and Firebird,” the season-opening concerts for the San Juan Symphony

When and where: 7:30 p.m. Saturday, Oct. 8 at the Community Concert Hall on the Fort Lewis College campus, 1000 Rim Drive in Durango, Colo., and 3 p.m. Sunday, Oct. 9 at the Henderson Fine Arts Center Performance Hall on the San Juan College campus, 4601 College Blvd. in Farmington.