The Appleseed Collective returns Wednesday, Aug. 10 to Crash Music at the Aztec Theater.

FARMINGTON — Brandon Worder-Smith, the violin and mandolin player for the Appleseed Collective, had no trouble recalling his band’s last visit to Crash Music at the Aztec Theater, where it will return for another show on Wednesday, Aug. 10.

It was almost exactly a year ago — Aug. 11, 2015, to be precise — that the Ann Arbor, Mich.-based foursome took the stage at the theater. Worder-Smith remembers it vividly because halfway through the first set, the power went out.

“We were in a totally dark room with a roomful of people,” he said, laughing. “We climbed off the stage, and people turned their cell phones on, and we went down and stood among them and finished the set.”

During intermission, Worder-Smith said, the power was restored. But when the musicians asked the members of the audience if they wanted them to plug their instruments back in and return to the stage, the answer was a resounding no.

“So we did the second set that way, too,” he said. “It was really intimate. It felt really cool. We got ‘em all crowded around, and I thought it had a beautiful, communal feel.”

Those kinds of unplugged performances aren’t something a band can pull off every night. But the novelty and spontaneity of it made for a special evening, Worder-Smith recalled as he spoke by phone from the road last week while he and his bandmates found themselves a little north of Wichita, Kan., where they were due to play that night.

No doubt the members of the Appleseed Collective wish they could find a way to create that kind of intimacy every night. In fact, since their last Aztec Theater appearance, they’ve made a serious investment in tapping into that elusive feeling.

“We actually just got started working with a stage coach,” Worder-Smith said. “Now, I see other bands, and I (think), ‘Wow, I wonder if we looked like that six months ago.’ I hope there’s a big difference and that we’re projecting outward. We’re learning to relate with the audience more and create a shared experience with the audience. It’s not like they’re all singing along, but we all get to go somewhere together. It’s not like, ‘We’re going to play music, and you’re going to watch.’ That doesn’t cut it for us anymore. It’s about how can we make this a more complete experience?”

That desire to create a stronger link with its fans isn’t something new for the Appleseed Collective, an acoustic quartet that performs a stylized mix of Dixieland, ragtime, bluegrass and Gypsy. The band tours constantly but nevertheless has managed to release five recordings over the last six years — three of which were recorded live and that were designed to capture the group’s sound and style at a specific point in its evolution.

Still, Worder-Smith said there was a growing consensus in the band that there was room for improvement.

“There was a feeling that something was missing, but we didn’t know exactly what,” he said. “During our peak shows, yeah, we were so connected, and there were plenty of those shows. But we didn’t want to leave that to mystery and magic. We wanted to know about the science behind the magic. It has to be repeatable.”

The group’s efforts to identify that magic and access it more regularly appear to be paying off, Worder-Smith said, citing a recent gig as an example.

“We were playing a college town (that had emptied out for the summer), and there were maybe six people in the audience,” he said. “But those six people got a hell of a show. The old us would have been discouraged. We would have played our music and probably enjoyed it OK, but the new imperative to us is that every show is the best one we can do. Even if there’s just one person in the audience, we want that one person to feel like royalty. … Every single night, we want to do an amazing show – no excuses.”

The group’s most recent recording — 2015’s “Tour Tapes” EP — certainly values quality over quantity. Though it features just five songs, Worder-Smith said it was an attempt to capture the band at its height during a two-week East Coast tour last year. 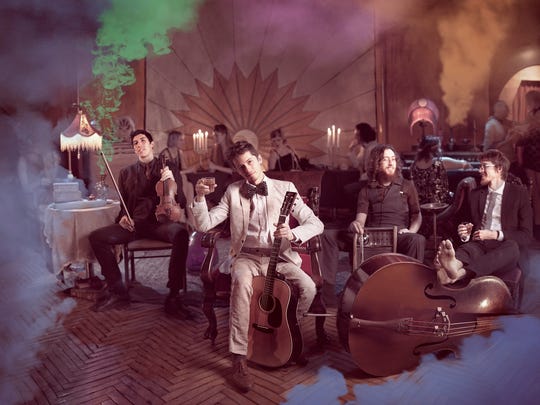 The Appleseed Collective is planning on releasing a new album in 2017, its first studio effort in three years. (Photo: Courtesy photo)

“These were the five best takes of the East Coast tour,” he said. “We’re really proud of it, and there are no overdubs on it.”

All told, the Appleseed Collective was on the road for nine months last year, traveling extensively throughout the Midwest and the West in addition to the East Coast.

“The machine has not really slowed down,” Worder-Smith said of the band’s hectic pace, though he does think the group has been able to take stock of its place in the musical universe and chart its future a little more of late.

“We’ve planned out a year in advance, and we’re working on a new album,” he said, adding that the new disc should be released some time in 2017. “It’ll be our first studio album in almost three years.”

As much as anything else, “Tour Tapes” was intended to hold over the band’s fans until that new album is ready, he said.

“We needed to get something out, and we had no time to sit down and work through all this (new material),” he said. “Half the songs we play are not available on an album. It’s been three years since we actually got to a point where we could do this.”

The group won’t rush the recording process for the new disc, he said.

“It’s the difference between building a shelter and building a theater,” he said. “Do you want to just sit down and scrabble something together? When you build a theater, it’s designed to hold something beautiful. Hopefully, that’s what we’re building.”

Even so, the members of the Appleseed Collective value their live recordings and their ability to convey an atmosphere that can’t be duplicated in a sterile studio environment.

“I think there’s a certain magic you can capture with that, and we do like that,” he said. “A lot of bands shy away from playing on a live album because they want to be perfect. In our modern society, for so many years, it seems like music has been crafted like a sculpture.

“But there’s an element of wildness you can capture (in a live recording),” he said. “How did it feel that night? What did that solo try to evoke? That’s kind of cathartic. So we do like it. It’s also allowed us to continue to release albums while we’re busy with touring.”

Even though the band seems focused on living in the moment to a large degree, Worder-Smith said it’s also important to take the long view, as well.

“You can’t skate by doing this kind of thing,” he said. “We always have a plan pretty far ahead because we have an agent. We’re booked through next summer already, and our personal plans extend to 2018 in terms of where we’re trying to figure out how everything goes down. You create the big picture plan so the spontaneity can happen with it.”

What: The Appleseed Collective concert