Gary Farmer and the Troublemakers to play Aztec

Gary Farmer and the Troublemakers return to the Crash Theater in Aztec this weekend.

Gary Farmer and the Troublemakers to play Aztec

Gary Farmer and the Troublemakers will feature an updated set list and a new vocalist/guitarist during their show this weekend in Aztec.(Photo: Courtesy photo)

FARMINGTON – While he splits his time between film, television and stage acting, and performing live music with his blues band the Troublemakers, Gary Farmer said he basically grew up in the theater, and it remains his primary point of reference.

But when he moves away from stage acting — as he is doing right now, having completed a three-week run of the new musical “Indian Joe” in Connecticut last November — and back into the live music realm, it’s largely a seamless transition, he said.

“My (musical) presentation is a little more theatrical than average,” Farmer said during a phone interview from his Santa Fe home last week as prepared for a show this weekend at Crash Music in Aztec.

Much of the time Farmer spent on stage in the new musical, he was singing and playing harmonica, just as he does as the frontman of the Troublemakers. Those performances may not have had room for as much improvisation as a standard live music gig, but Farmer said it was just as important to react to and connect with the audience, despite the entirely scripted nature of the work.

“It was hours and hours of music rehearsal and play rehearsal,” he said of his experience in “Indian Joe.” “It was three and a half weeks of eight to 10 hours a day. It’s a different level (of commitment).”

Farmer — best known for his roles in the films “Powwow Highway,” “Smoke Signals” and “Dead Man,” in which he co-starred with Johnny Depp — said the experience was not just mentally and artistically taxing, but physically draining, as well. His batteries got run down, and he had to fight his way through a long illness when he got back home after the production ended its run.

“It literally took me down for a while,” he said. “It’s taken me a while to get back on my feet.”

Still, Farmer has no regrets about his participation in the project.

“It was one of the best things I ever did,” he said of the play, which focuses on the unlikely bond between a homeless Native man, played by Farmer — an Ontario native and member of the Cayuga Nation — and a Texas beauty queen, played by and based on the play’s author, Elizabeth A. Davis. “I felt like the story really moved the audience emotionally.”

Gary Farmer and the Troublemakers has an all-star lineup of Native musicians, and perform throughout the United States and Canada. (Photo: Photo courtesy of Nancy Smith/Lightninghorse Photography)

The production was mounted by Goodspeed Musicals, and the cast performed eight shows a week from Oct. 22 through Nov. 15 at the Norma Terris Theatre in Chester, Conn. Farmer said the production was designed to take place in a small, out-of-the-way market so that the cast and crew could iron out its kinks before it is remounted in a larger market later, perhaps Dallas.

Farmer hopes to be a part of it again once that happens, but he understands the play’s dark subject matter may limit its appeal.

“It’s a bit of a hard sell,” he acknowledged. “In the end, I suspect it won’t go to Broadway because of that. I mean, are people going to go see ‘Indian Joe’ or ‘The Producers’? But it was a real interesting experience because it was based on a true story.”

The real-life figure portrayed by Farmer died before the production was mounted, and Davis had his ashes in her possession, since the man had no family to claim his body. The cast chose to commemorate his passing by scattering the ashes around the theater, Farmer said.

The intense workload and the emotional circumstances under which the play made its debut gave the entire experience a great deal of meaning, Farmer said, one he won’t soon forget.

“I’ve got this brand-new group of friends,” he said. “When you do an intense theater experience like this, you become like family.”

After physically recovering from the play’s run, Farmer quickly refocused his attention on his music career. He and the Troublemakers completed an ambitious 26-date tour across seven states late last summer in the wake of their 2015 release “Road Songs,” and Farmer is eager to pick up where that endeavor left off.

“I’ve been trying to write a new album,” he said. “I’ve got several things on the move. There seems to be a lot more humor coming out this time, and I’m having a good time creating new music for the band.” 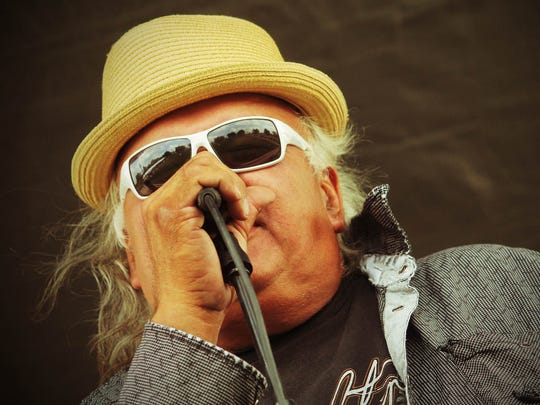 Gary Farmer has returned to the live music portion of his career after spending much of last fall performing in a new stage musical, "Indian Joe." (Photo: Courtesy of Nancy Smith/Lightninghorse Photography)

The Troublemakers feature an all-star lineup of Native musicians, including guitarist/keyboardist Derek Miller, who has won two JUNO Awards, the Canadian equivalent of a Grammy Award, and who just nominated for another. Miller has been touring extensively throughout Canada performing songs from his new album, which features covers of songs by Native rock musicians such as Robbie Robertson of The Band, and Farmer said the Troublemakers will be incorporating much of that material into their set list for this tour.

The band also will be featuring a newly added vocalist and guitarist during its performance in Aztec, Santa Fe resident and Detroit native Faye Schilkey. Farmer is excited about what she brings to the group.

“She’s got a real R&B sense, and she does all originals,” he said. “She brings us a whole new audience. She holds her own ... I feel like it’s a brand new show.”

The opening act for this weekend’s concert is Tyra Preston and the Shawn Smith Band, a Native act that opened for country star Eddy Raven at the 2015 Northern Navajo Nation Fair.

What: Gary Farmer and the Troublemakers concert, opening for Tyra Preston and the Shawn Smith Band