The local metal act Signal 99 got a taste of the big time recently with an opening gig at Hollywood's Whisky a Go Go.

Bassist Brandon Curly and singer Chuck Haven of Signal 99 perform during the band's Feb. 28 gig at the famed Whisky a Go Go in Hollywood.(Photo: Courtesy of Mathias Fau)

FARMINGTON — Normally, Chuck Haven of the local metal group Signal 99 likes for his band’s manager to keep him informed about all of the places she tries to get the group booked.

But when the band was working on lining up a string of dates through Southern California for the summer, she decided not to tell Haven she had submitted a proposal to the world-famous Whisky a Go Go, the Sunset Strip nightclub where an outfit called the Doors once served as the house band and where such acts as Janis Joplin and Led Zeppelin made regular stops back in the day.

So Haven was more than a little surprised when she called him one day in late January and told him Signal 99 had been offered a gig at the iconic rock club in late February, opening for the Hollywood band Vampires Everywhere.

Guitarist Gaberial Peters, left, and Chuck Haven of Signal 99 race through a 30-minute set at the Whisky a Go Go in Hollywood on Feb. 28. (Photo: Courtesy of Mathias Fau)

“At first, I thought she was just kidding,” the soft-spoken Haven said last week. “I didn’t believe her until she sent me a screenshot of the offer from the club.”

Haven was disciplined enough to contain his excitement and resist the urge to tell everyone he knew about the offer until the deal had been finalized, which took several days. And once the gig was confirmed on Jan. 27, Haven and his bandmates still had a month to agonize before they headed west for the Feb. 28 show.

“I’ve always heard about the place,” he said. “I know the Doors and Motley Crüe played there, and I’ve been to L.A. a few times, although I’ve never spent much time in Hollywood. It was quite an experience for me.”

Signal 99 left home the day before the gig, and Haven laughed as he recalled how jittery everyone became as the reality of the show set in.

“The closer we got to Hollywood, the more we got nervous,” he said a few days after Signal 99 had returned from the show. “We don’t really see ourselves as that kind of stature. It was a totally new environment for us … but I guess it finally hits you when you get to the venue and see your band’s name on the marquee.” 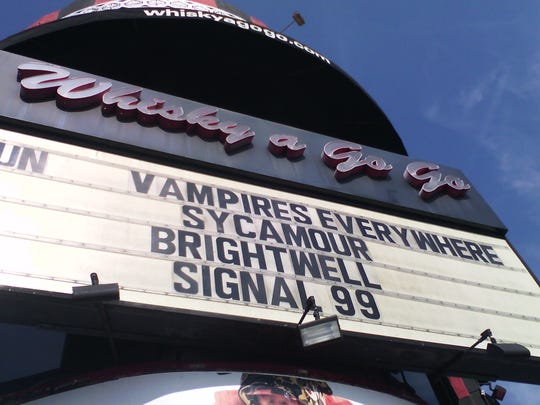 Chuck Haven of Signal 99 said the reality of his band's performance at the famed Whisky a Go Go didn't really set in until he saw the band's name on the marquee of the West Hollywood institution. (Photo: Courtesy of Chuck Haven)

The experience itself was everything Haven hoped it would be. Signal 99 was the first band to take the stage on a four-band bill, and the club was only half full at that point, which wasn’t surprising, since it was a Sunday night. But the 150 or so people in the audience quickly warmed to the band, and Haven said the 30 minutes his group spent performing seemed like only a fraction of that.

“I’ve always been told it’s a tough crowd (there),” Haven said. “But people started coming up to the stage right away, and a lot of people were offering to buy us drinks afterward. It was a really good environment. I couldn’t ask for anything else.”

Haven said the band was treated very well from the moment it arrived at the club and had the chance to meet the other groups during the load-in that afternoon. To his surprise, Signal 99 got its own dressing room, and Haven had the chance to wander around backstage and check out the signatures of many of the luminaries who have performed at the Whisky over the years.

Signal 99 managed to squeeze in nine songs during its 30-minute set, and Haven said the show was the first one with the band for its new drummer, Fred Brown. With that in mind, Haven said he chose a set list that was heavy on the group’s older material, rather than trying to pull off too many of the songs on its new album, which is due out soon.

Haven was still reveling in the glow of that performance late last week. He was especially pleased when a thank-you email he sent to the club’s booking agent drew a quick response. The woman said she was not present at the show, but she reported she had heard good things about the band. She closed by extending an invitation to Signal 99 to come back to the Whisky and play again sometime.

Chuck Haven, front, and Fred Brown of Signal 99 are pictured during the band's Feb. 28 performance at the Whisky a Go Go when the band opened for Vampires Everywhere. (Photo: Courtesy of Mathias Fau)

While the band has played before much larger crowds than it did at the Whisky — Signal 99 has performed several times at the South by Southwest Music & Media Conference in Austin, Texas, and once won a national contest sponsored by guitar strings manufacturer Ernie Ball — Haven said the show ranked high in terms of prestige.

“We have played some really good and high-profile shows,” he said. “The difference with the Whisky gig compared to the others … with the Whisky gig, we were invited to play a legendary rock stage. We didn’t have to compete to get a spot. A lot of music icons played there, and it was an honor to be a part of that. So, yes, this gig has been a big one for us.”

Haven isn’t sure how much of an impact the experience will have on his band’s future, but he hopes it raises a few eyebrows.

“Bands are always looking for credibility,” he said. “A lot of bands sound good on a recording, but it’s another thing to go out and deliver it live. And good word of mouth leads to other gigs.”

Signal 99 will have little time to savor the experience. The group heads back to south Texas next week for a pair of SXSW gigs. Signal 99 will play a showcase at Burnside’s Tavern at 5 p.m. Friday, March 18, as part of the Music Gorilla Showcase, then play another showcase at the Heart of Texas Rockfest that same weekend. The band also has a gig booked at Tennyson’s Tap in Denver on April 23.

Still basking in the glow of its Feb. 28 show at the Whisky a Go Go in Hollywood, the local metal act Signal 99 heads to Austin, Texas, next week for the annual South by Southwest Music & Media Conference. (Photo: Courtesy of Mathias Fau)

Meanwhile, Haven is working on finishing the vocals for the new Signal 99 album, which was supposed to have been released last fall. Haven said the project was delayed while the group mulled over a pair of offers from record labels and the demands of his personal life took over.

“In college at the University of Arizona, I was going to school full-time and working two jobs — and I could handle that,” he said. “But juggling work, music and family is way harder to do. Work is predictable. But when my 5-year-old gets sick, it happens when it happens. It’s a difficult balancing act.”

Still, Haven is eager to see what kind of response the new album draws upon its release. While the members of Signal 99 decided that neither of the offers they received from record labels were worth accepting, he acknowledged it’s always nice to be wanted.

“It reassured us we’re heading in the right direction,” he said.