Theater Ensemble Arts raises the curtain on its production of the farce "Drinking Habits 2" this weekend. 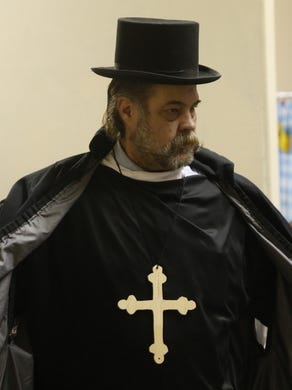 Dakota Davis, left, and Kiana Poafpybitty are featured in a scene from the Theater Ensemble Arts production of "Drinking Habits 2: Caught in the Act." Mike Easterling/The Daily Times
Fullscreen 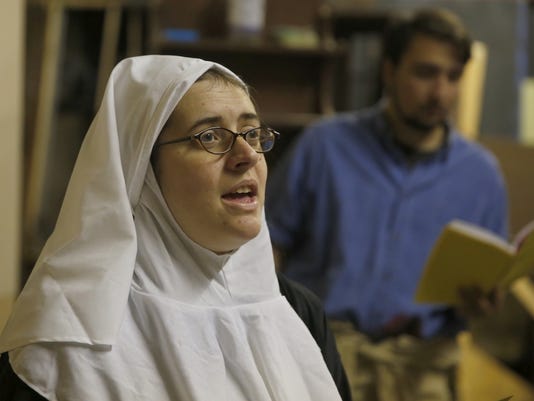 FARMINGTON — When he wrote his stage farce "Drinking Habits" in the early 2000s, playwright Tom Smith says he did so because he recognized there was a dearth of such material for community theater groups.

And even now, a dozen years later, that shortage of farces hasn't really been addressed, he said. That led Smith to take a sabbatical from his role as a member of the theater faculty at New Mexico State University in 2015 to craft a sequel to "Drinking Habits," a tale of two nuns who secretly make and sell wine to keep their small convent afloat — and the most popular play Smith has ever written.

While Smith was putting the finishing touches on his follow-up, the Farmington-based community theater group Theater Ensemble Arts was delivering a well-received production of the original. In fact, Brit Ward, who oversaw that production and performed in the cast, explained that he was asked by the TEA board to direct last summer's TEA production of "M*A*S*H" because that production of "Drinking Habits" was so successful.

"At times during 'Drinking Habits,' you couldn't hear (the actors) because the audience was laughing so hard," Ward said. "I think (Smith is) absolutely right — there is so much demand for this kind of farce. Even people who hate theater love laughing and love watching people fall over stuff."

Two years after it mounted its production of the original, TEA will raise the curtain this weekend on the sequel, "Drinking Habits 2: Caught in the Act." Ward describes the play as only slightly less farcial than the original, with greater character development and more emotion this time.

Smith said he stuck largely with his proven formula from "Drinking Habits," a play that has been produced dozens of times in 14 countries and translated to six languages. He said he never dreamed he'd be called upon to write a follow-up to that effort — nor was he particularly interested in the idea of doing that.

"A couple of years ago, I realized there might still be some legs to it," he said last week during a phone interview from Tacoma, Wash., where he is now a member of the theater faculty at Pacific Lutheran University. "Part of what I wanted to do (originally) was that I hoped there would be so many farces (later) that there would be no need for me to do another one."

That anticipated flood of material never developed, and Smith couldn't resist calling on his beloved characters again — especially the show's central characters, the clever nuns Sister Philamena and Sister Augusta — for a second round of secretive wine making and fun.

The "Drinking Habits" franchise stands virtually alone in Smith's canon of work as a writer, he said, though his embrace of humorous material is something that takes him back to his days on stage.

"I love comedies very much," he said. "As a former performer, I did strictly comedies. But when I became a writer, I began to favor small-cast dramas. So this adds balance to my creative life."

The cast is rounded out by Kiana Poafpybitty, Dayton Plumb, Kevin Tschetter and Madison Ballard.

Ward said he placed no restrictions on the returning cast members when it came to interpreting their characters in this production. 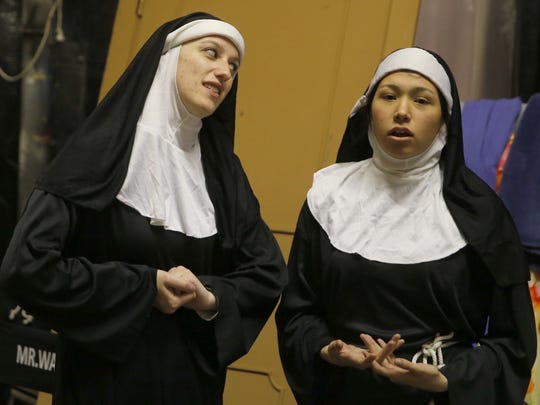 Dakota Davis, left, and Kiana Poafpybitty are featured in a scene from the Theater Ensemble Arts production of "Drinking Habits 2: Caught in the Act." (Photo: Mike Easterling/The Daily Times)

"I wanted them as actors to be free enough to do different things with their characters," he said. "I thought it was unfair to put them in a bubble, so I wanted them to have some free space and have some fun with the character."

This is the first time Ward has directed a sequel, and he initially wasn't keen on the idea. He allowed himself to be talked into it by the TEA board, but only when he was told that "Drinking Habits 2" would be the company's second production of 2017, not its first.

Ward made it easier on himself by bowing out of the cast and simply directing this production. He said pulling double duty last time wasn't easy.

"It was very distracting," he said. "I'm not Kenneth Branagh (the Northern Irish actor perhaps best known for drawing Best Actor and Best Director Academy Award nominations for his 1989 adaptation of Shakespeare's "Henry V"). I only did it last time out of necessity. I think ultimately, I'm more comfortable in the director's chair."

The continuity in the cast and the familiarity with the characters allowed Ward to hit the ground running for this production, something he said he needed, given the short break he had between "M*A*S*H" and "Drinking Habits 2."

Though she is new to this franchise, Ward had worked with Ballard in "M*A*S*H" and raved then about her portrayal of Maj. Margaret "Hot Lips" Houlihan. He's just as impressed with her performance this time.

"She's the most naturally talented person I've ever worked with," he said.

Ward also likes the ensemble nature of the cast.

"Everyone here (brings) some kind of weight to this production," he said. "Everyone feels important to the production."

The entire cast seemed to be in the zone as soon as rehearsals started for "Drinking Habits 2," Ward noted, and he felt like he never had to do anything more than fine tune the actors' performances.

"It allowed me to put my energies elsewhere," he said. "I didn’t' focus on building things from the ground up. I don't think I've ever had a production that feels this relaxed before."

Overall, the cast is a little younger this time, and that has given the production a fresh energy.

"It feels faster," Ward said. "It's fun. It's a whole new experience instead of repeating everything."

That's apparently true for the playwright, as well. Smith said the sequel was definitely harder to write than the original.

"The first one, I felt like I couldn't do any wrong," he said, noting the ease with which the words spilled on to the page.

But Smith was intent on not repeating himself, so his challenge was to add greater depth to his characters this time, and that took careful consideration.

"In some plays, the characters don't change much," he said, describing the consistency of the figures who populate another stage comedy set in a convent, "Nunsense," which reportedly generated six sequels and three spin-offs. Smith said he purposely avoided that approach.

"I wanted to look at the sequel as a true sequel and dig deeper," he said. "It had been 12 years since I had written 'Drinking Habits,' and coming back to those characters after all that time was interesting — and I'm a different writer." 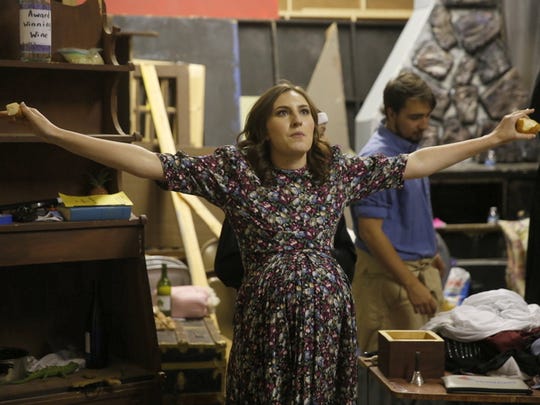 According to his website, Smith has written 10 full-length plays for adult audiences over his career, as well as several short plays, Shakespeare adaptations and plays for young audiences. But the "Drinking Habits" franchise holds a special place in his heart — and, now, so do farces.

"I've had the most commercial success with this play, and I'm interested in exploring the genre more — not just in terms of a third 'Drinking Habits,' but another farce I'm about to write," he said.

Joining him in that change of heart is Ward, who has long felt himself drawn to small-cast dramas, what he describes as "smaller" productions. But his recent work at TEA has demonstrated to him the benefits of pushing his boundaries and working in different genres.

He expects to direct a blend of genres in the future.

"I think my fear of comedy for the longest time was not understanding the nuances of it," he said. "Once I got in line with how to tell a joke, I recognized that it covers a lot of the same ground as drama does. And I've kind of fallen in love with comedy." 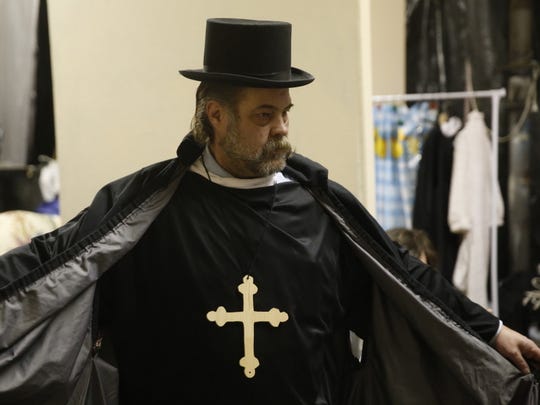 What: The Theater Ensemble Arts production of "Drinking Habits 2: Caught in the Act"

Where: The Totah Theater, 315 W. Main St. in downtown Farmington

Tickets: $10 for adults and $8 for seniors or students. Sunday matinee tickets are half price with a donation of nonperishable food items to the ECHO Food Bank