Farmington Museum Curator Jeffrey Richardson presents a lecture on television Westerns at the museum this weekend. 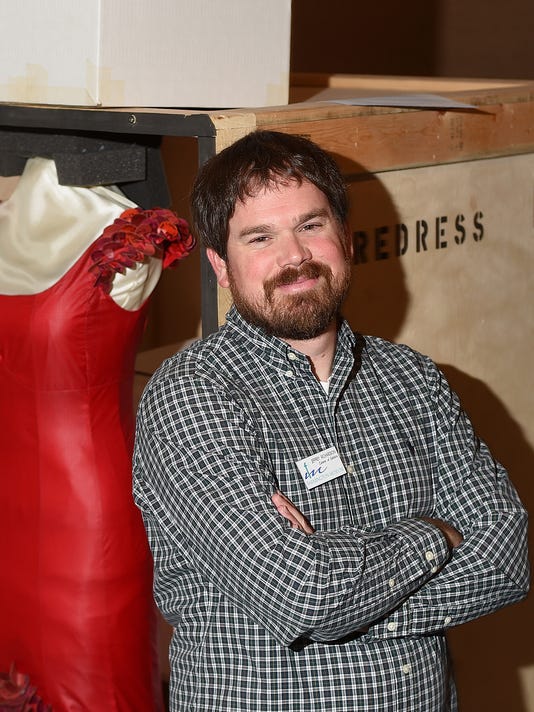 Farmington Museum Curator Jeffrey Richardson will examine the history and future of TV Westerns in a presentation this weekend at the museum.(Photo: Daily Times file photo)

FARMINGTON — It’s been nearly a half century since their heyday, but in the years since, no genre — not sit-coms, not cop shows, not even the ubiquitous reality show — has dominated the American TV landscape the way Westerns did from 1949 to 1975.

Now approaching his 40th birthday, Farmington Museum Curator Jeffrey Richardson didn’t grow up with those programs the way baby boomers typically did. But as a student of Western history, he’s fascinated with the unmatched popularity they enjoyed among American viewers during that era — and how quickly that all went poof.

“No television genre in history was as dominant as Westerns were in that period,” he said. “But no other genre has disappeared as quickly and completely as Westerns.”

Richardson will explore that phenomenon in a presentation called “The Rise and Fall of the Television Western” this weekend at the Farmington Museum at Gateway Park, part of his Curator’s Choice Lecture Series: The American West in Fact or Fiction.

At one point, seven of the 10 top-rated programs on American television were Westerns, Richardson said, and tens of millions of viewers tuned in for hours every night to catch the adventures of their heroes through such legendary programs as “Gunsmoke,” “Bonanza,” “Rawhide,” “The Big Valley,” “Have Gun, Will Travel,” “Maverick,” “The Wild, Wild West” and “The Lone Ranger.”

Richardson said the popularity of the genre is a direct reflection of America’s “Manifest Destiny” philosophy and the fact that, for most of this nation’s history, there was a seemingly boundless frontier that beckoned, seemingly offering opportunity to anyone adventurous enough to test it and weather its challenges.

“What made American democracy work was the idea of the frontier, this constant stretching of the border,” Richardson said. “By the time true popular culture began to take form as we know it through dime novels and Wild West shows, the West was the most popular story. Everyone could relate to this idea of American exceptionalism through this movement west.”

It was a message that seemed tailor made for television. The medium had exploded across American society in a short period, with nine out of 10 households having a set by 1960, as opposed to 1947, when only a few thousand sets were in use. The one genre that resonated the most with Americans was the Western, Richardson said — a phenomenon that would continue unabated for 25 years.

This map highlights the Ponderosa ranch that served as the setting for the long-running television series "Bonanza." (Photo: Courtesy of the Autry Museum of the American West)

It was a fascination that began in television’s earliest days, he said, explaining that most of the first TV Westerns — “The Lone Ranger,” “The Roy Rogers Show,” “The Gene Autry Show” and “Hopalong Cassidy” among them – were aimed at juveniles, offering simple, good guy vs. bad guy themes. TV executives learned quickly that those children who sat glued to the floor in front of their living room sets each week were especially susceptible to marketing campaigns that featured the stars of those programs. So it wasn’t long before a long line of lunch boxes, clothing, toys, books and other merchandise was being churned out to meet that demand.

“They capitalized on licensing merchandise,” Richardson said. “The early TV Western pioneers would put their name on anything except cigarettes or alcohol — anything they could attach their names to and not feel guilty about.”

Especially popular was the fabled coonskin cap worn by actor Fess Parker in his portrayal of Davy Crockett on the ABC “Disneyland” series in the middle 1950s. 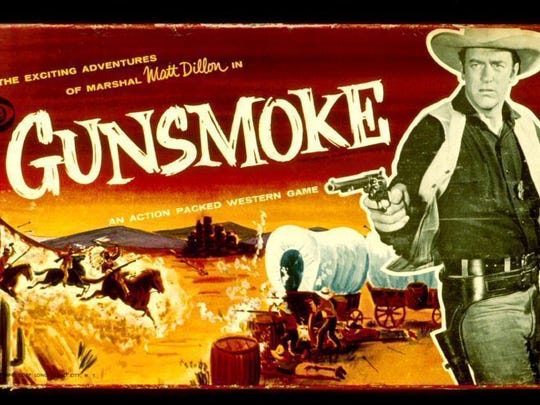 Many popular TV Westerns offered spin-off products, as demonstrated by this 1958 board game based on the CBS series "Gunsmoke." (Photo: Courtesy of the National Museum of Play)

It wasn’t long before TV programmers began producing Western series for adults, as well, and they proved no less popular than they did with younger viewers. The difference is, those shows featured considerably more violence, belying the notion that such programming was exclusively clean, wholesome entertainment, Richardson said.

Those series served as a proving ground for many actors, writers and directors who would go on to become some of the biggest names in Hollywood, Richardson said, pointing to Clint Eastwood (“Rawhide”), Steve McQueen (“Wanted: Dead or Alive”), Michael Landon (“Bonanza”) and James Garner (“Maverick”), even Ronald Reagan (“Death Valley Days”). Behind the camera, legendary director Sam Peckinpah, best known for his epic 1969 Western film “The Wild Bunch,” cut his teeth in Hollywood writing and/or directing several episodes of “The Rifleman,” among other programs.

The genre also provided a start for a young writer named Gene Roddenberry, who authored scripts for such shows as “The Virginian” and “Have Gun Will Travel.” But Roddenberry was eager to explore other themes that were becoming more prevalent in American society in the 1960s — race, class and gender, in particular — and he understood that the white male-dominated world of TV Westerns wasn’t the place to do it, Richardson said.

So Roddenberry capitalized on another American fascination — the space race with the Soviets — and launched a revolutionary program called “Star Trek,” Richardson said. Under that setting, Roddenberry was free to craft far more complicated, diverse characters than the Western genre would support. 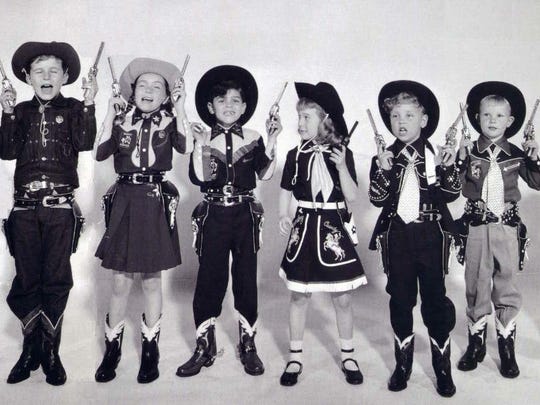 Young Hopalong Cassidy fans display their enthusiasm for their hero in this photo, circa 1950. Many of the earliest TV Westerns were aimed at children. (Photo: Courtesy of owensvalleyhistory.com)

“He moved his Western into outer space and created a whole new genre,” Richardson said. “Just think about the opening lines: ‘Space – the final frontier.’”

Roddenberry proved prescient in his decision to get out of the TV Western business while the getting was good, Richardson said, explaining that by the middle 1970s, a variety of factors — oversaturation, clichés and stock characters — had led to the demise of the genre.

“And that’s something it’s never been able to recover from,” he said.

Part of what led to the genre’s loss of popularity was the fact that America was moving quickly from a largely agrarian society to a largely urban one, Richardson said. In the 1950s, it wasn’t uncommon for the average American to have a recent relative who had been part of the great migration westward, and that gave millions of people a direct link to the frontier.

But by the 1970s, with Americans clustering in suburbs, those relatives — and those frontier ideals — were increasingly distant. The civil rights and feminist movements had changed attitudes, as well, he said.

“People were questioning what had come before them, and that included entertainment,” Richardson said. “They didn’t want to watch the same things Mom and Pop watched. There were a lot of shifts taking place in American demographics, and that led to the demise of the Western.”

It’s not as if there weren’t exceptions to that rule over the years, Richardson noted, with various attempts being made to revive the Western as a popular genre in TV.

But even when a Western was able to crack the prime-time TV lineup, its makeup had changed dramatically, he said, citing perhaps the most successful TV Western of the 1990s, “Dr. Quinn, Medicine Woman” as an example. The program may have been the kind of safe, wholesome entertainment that fans of nostalgia craved, but it also starred a woman, Jane Seymour, and that fact alone separated it from its predecessors, Richardson said.

More recently, cable networks have embraced the genre to varying degrees of success, most notably through such programs as HBO’s “Deadwood” and AMC’s “Hell on Wheels.” But for the all the attention those programs garnered because of their dark, bloody take on the American West, they attracted few viewers, with the much-ballyhooed “Deadwood” lasting just three seasons, Richardson said.

This 1959 TV Guide cover features actor Steve McQueen, star of the series "Wanted: Dead or Alive." McQueen would go on to become one of the biggest names in Hollywood. (Photo: Courtesy of TV Guide)

Now comes the latest cable TV stab at the genre, HBO’s “Westworld,” a remake of the 1973 Western film starring Yul Brynner, James Brolin and Richard Benjamin. Aside from its setting, Richardson said the series has little in common with the TV Westerns of yore.

“It’s not a typical Western,” he said. “It’s a Western packaged as so many different things. And that demonstrates that for a Western to be successful now, you have to package it in a different way.”

Richardson has spent much of his career studying the American West, and he said he’s particularly fascinated with examining how the West has intersected popular culture. That puts this subject right in his wheelhouse, he figures.

“I’m fascinated by the fact that Westerns exploded and then declined so quickly,” he said. “As a historian, that’s a very unique circumstance to explain. TV Westerns are something I don’t look back on with a lot of nostalgia, but this is a subject I’ve found just as appealing as someone who grew up watching them every day. I’m interested in why it continues to have appeal, but in different ways — and what the future of the genre may hold.”

What: “The Rise and Fall of the Television Western,” a presentation by Jeffrey Richardson as part of the Curator’s Choice Lecture Series: The American West in Fact or Fiction

Where: The Farmington Museum at Gateway Park, 3041 E. Main St. in Farmington