The Theater Ensemble Arts production of "Picasso at the Lapin Agile" opens this weekend in Farmington.

Lauryn Morrison, left, as Suzanne and Abron Lobato as Pablo Picasso rehearse for the Theater Ensemble Arts production of "Picasso at the Lapin Agile" by Steve Martin, on Friday at the TEA scene shop in Farmington. Steve Lewis/The Daily Times
Fullscreen

Chuck Holmes as Gaston and Lauryn Morrison as Suzanne are featured during a dress rehearsal for the Theater Ensemble Arts production of "Picasso at the Lapin Agile" on April 15 at the TEA scene shop in Farmington. Steve Lewis/The Daily Times
Fullscreen 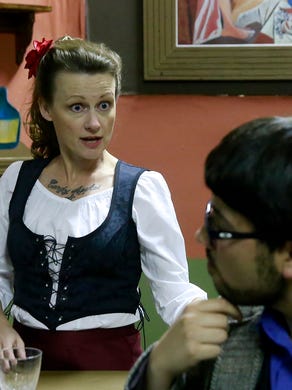 Rhonda Sigler, left, as Germaine and Abron Lobato as Pablo Picasso rehearse a scene for the Theater Ensemble Arts production of "Picasso at the Lapin Agile" on April 15 at the TEA scene shop in Farmington. Steve Lewis/The Daily Times
Fullscreen

Abron Lobato, left, and Talon Holmes rehearse a scene for the Theater Ensemble Arts production of "Picasso at the Lapin Agile" on April 15 at the TEA scene shop in Farmington. Steve Lewis/The Daily Times
Fullscreen

FARMINGTON – David Mayeux used to be a regular in local theater productions, portraying such varied characters as the Cowardly Lion in “The Wizard of Oz,” Nathan Detroit in “Guys and Dolls” and the dual roles of a Navajo medicine man and a Mexican henchman in “Black River Traders.”

But when he began rehearsals for the upcoming Theater Ensemble Arts production of “Picasso at the Lapin Agile,” it had been 13 years since he had set foot onstage.

“It has been cathartic,” he said of the experience of returning to acting. “I had forgotten why I had gotten out of it. But when we got back in rehearsals, I remembered. It takes a lot of time.”

And free time is something the San Juan College astronomy professor and Planetarium coordinator doesn’t have in abundance. He said he agreed to take on the role only after coming to an agreement with TEA officials that he wouldn’t be able to attend every rehearsal, given the fact that his schedule at the college includes teaching two night classes a week.

“Every one of my weeknights is spoken for,” Mayeux said last week as the play’s cast put the final touches on the production that opens this weekend at the Totah Theater. “It’s a cliché to say it, but it is a labor of love.”

As director Thomas LaRue explained, the Steve Martin-written comedy focuses on a fictional meeting between painter Pablo Picasso and physicist Albert Einstein in a Paris bar at the beginning of the 20th century, years before either has achieved fame. Mayeux portrays Einstein, while SJC student Abron Lobato plays Picasso.

Mayeux said he had little familiarity with the play before he learned TEA would be producing it, but he resolved to read for a part once he learned more about it.

“I missed acting … and I liked that the setting was French, because doing accents is something I like to do,” he said.

Casting an astronomy instructor as the world’s most famous scientific figure might have seemed like a no-brainer, but Mayeux said he actually read for several parts, not just that of Einstein.

“I love slipping into a different persona,” he said. “I put myself into it. It’s like shape shifting. It’s a creative way to experience oneself. But I will say I was happy (to land) the role (of Einstein).”

Mayeux said his professional background did provide him with some advantages as he took on the role.

Mayeux said he was less familiar with Einstein’s personal habits before he took on the role, but he later discovered an interesting difference between himself and the German-born scientist.

“He typically didn’t wear socks,” Mayeux said, laughing. “He said, ‘Why wear socks? You’ll just get holes in them.’ But I love socks, so I guess I didn’t really agree with him on that.”

Chuck Holmes as Gaston and Lauryn Morrison as Suzanne are featured during a dress rehearsal for the Theater Ensemble Arts production of "Picasso at the Lapin Agile" on April 15 at the TEA scene shop in Farmington. (Photo: Steve Lewis/The Daily Times)

LaRue was already familiar with Mayeux, having worked with him on a Sandstone Productions show years ago.

“David brought in a perfect Einstein accent,” he said. “And I know he’s got a great acting ethic. He’s a fun performer to be around.”

The other lead performer in the show, Lobato, will be making his TEA debut. At just 19, the 2015 Farmington High School graduate’s acting experience has been limited, and he said his former roles have consisted primarily of supporting characters — a monkey and a hit man, for instance.

But he relishes the opportunity to get inside Picasso’s skin, he said, explaining that he began to develop an appreciation for the Spanish-born painter and sculptor’s work when he was in middle school.

“It’s so different,” he said of Picasso’s Cubist style. “His style was so new, people didn’t really know what to do with it. I think people even now think his artwork is strange.”

As Lobato began to research the role, he said he discovered that Picasso was a guy who was rather full of himself.

“It turns out he was a horndog,” Lobato said, laughing. “He’s not just an artist, he’s a playboy. I thought to myself, ‘I’ll fill this part.’”

Mayeux laughed when told of Lobato’s assessment of Picasso, quickly adding, “Well, it was early-20th century Paris – there were a lot of horndogs.”

LaRue said Lobato quickly brought that passionate, womanizing machismo to the part, and he thinks his two leads play well off each other. Mayeux agreed.

“He’s fun to work with,” he said of Lobato. “He throws himself into his character, and there’s a lot of energy there.”

The two actors were still establishing their onstage rapport last week, Mayeux said, but he was confident they would get there by opening night.

“The way we both approach our roles makes it easy,” he said. 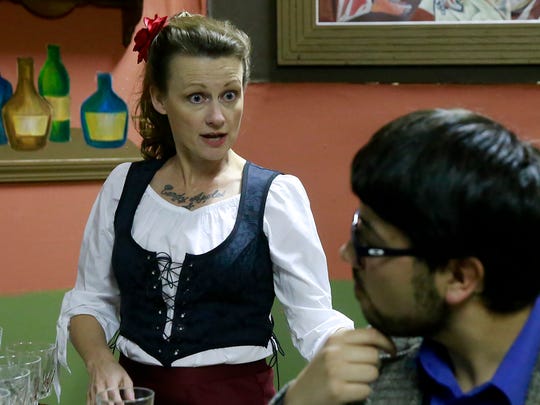 Rhonda Sigler, left, as Germaine and Abron Lobato as Pablo Picasso rehearse a scene for the Theater Ensemble Arts production of "Picasso at the Lapin Agile" on April 15 at the TEA scene shop in Farmington. (Photo: Steve Lewis/The Daily Times)

Other cast members include Rhonda Sigler, who portrays Germaine, a waitress at the bar; Dan Ware as Freddy, the put-upon bar owner; and Lauryn Morrison as Suzanne, a teenager who is infatuated with Picasso. LaRue raved about all of them, saying Sigler displays a great deal of talent in spite of the fact she’s only been acting for a year, while Ware manages to crack him up on a regular basis.

Mayeux described himself as a longtime fan of Martin’s work, especially his more obscure work, then demonstrated it by reciting several of his favorite lines from Martin’s all-but-forgotten 1983 comedy “The Man With Two Brains.” He believes “Picasso at the Lapin Agile” is Martin at his best.

“You can really see his humor in all the characters at one time or another,” he said. “It has his fingerprints all over it.”

LaRue is just as taken with the script.

“It’s very much a love letter from (Martin) to the 20th century,” he said. “It deals with how the 20th century was the first time in history that art and culture became more important than politics and nationalism.”

That message is firmly delivered by Martin in “Picasso at the Lapin Agile,” but LaRue said the playwright’s approach is only “serious-ish.”

Abron Lobato, left, and Talon Holmes rehearse a scene for the Theater Ensemble Arts production of "Picasso at the Lapin Agile" on April 15 at the TEA scene shop in Farmington. (Photo: Steve Lewis/The Daily Times)

LaRue said both the quality of the play and his interactions with the cast have made this a very enjoyable experience for him.

“There is nothing about it I don’t like,” he said. “I love what the actors bring to the table. Every single one of them has brought more than I expected. There have been jokes that even I didn’t get until I heard them delivered onstage.”

He believes his actors feel the same way about the experience.

“It’s always a joy to see people so excited about a project we’re doing,” he said.

What: The Theater Ensemble Arts production of Steve Martin’s “Picasso at the Lapin Agile”

Where: The Totah Theater, 315 W. Main St. in Farmington

Tickets: $10 for adults, and $8 for seniors and students. Sunday matinee tickets are half price with a donation of canned goods or toiletries to the Family Crisis Center