Jane Voss and Hoyle Osborne, shown here performing June 13 during the Summer Terrance Music Series at the Farmington Museum at Gateway Park, will deliver a Chautauqua at the museum this weekend.(Photo: Daily Times file photo)

FARMINGTON – Hoyle Osborne is the first to acknowledge that the musically oriented Chautauqua he’ll be delivering with his partner Jane Voss this weekend at the Farmington Museum at Gateway Park doesn’t fall within the traditional standards of those programs.

But that doesn’t mean their presentation lacks plenty of red meat, he says.

“I think some of the historically oriented organizations that sponsor Chautauquas don’t quite know what to make of it when they read about it in the (New Mexico Humanities Council's Chautauqua) catalog,” he said, laughing and referring to the “All In, Down and Out: The Great Depression in Story and Song” program he and Voss will be performing. “It probably doesn’t sound as serious or academic. But the council’s director, Craig Newbill, understands songs are historical artifacts. They’re just like soldiers’ letters home from the war. And there’s a lot to be taken out of that.”

“All In, Down and Out” was crafted by Osborne and Voss five years ago to mark the 80th anniversary of the stock market crash of 1929 that helped usher in the Great Depression. It features readings of the words of some of the more well-known writers, performers and personalities of that era, and those are woven among a series of songs that convey the spirit of those hard times.

Among the tunes featured in the show are “Nobody Knows You When You’re Down and Out” by Jimmy Cox, “Happy Days Are Here Again” by Jack Yellen and Milton Ager, “Hungry Blues” by Langston Hughes and James P. Johnson, “Pennies From Heaven” by John Burke and Arthur Johnston, “How Can a Poor Man Stand Such Times and Live?” by Blind Alfred Reed, and “Do-Re-Mi” and “Dusty Old Dust” by Woody Guthrie. 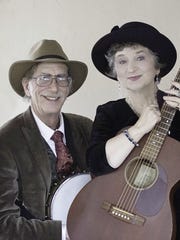 Hoyle Osborne and Jane Voss wrote the Chautauqua 'All In, Down and Out" for the 80th anniversary of the 1929 stock market crash. (Photo: Courtesy of Gabriel Montes)

“We perform those songs with great authenticity and emotional impact,” Voss said. “We want the audience to understand what people were going through, rather than dryly relating it.”

That explains the approach Voss and Osborne take to all their Chautauqua presentations. That list includes “I Want to Be Bad: The Flapper and Her Song” and “1912: A Musical Snapshot of America in the Year New Mexico Became a State.”

“We like to look at these topics from the ground level,” Osborne said, explaining that he and Voss often eschew that strictly academic approach in favor of pursuing a more personal perspective. “We use a lot of commentary from ordinary people who lived through these experiences.”

In regard to this Chautauqua, Hoyle said, he and Voss relied heavily on author Studs Terkel’s “Hard Times: An Oral History of the Great Depression” for much of the material they use. Osborne said Terkel’s work featured the impressions of Americans ranging from farmers to Hollywood actors.

Voss said it was not difficult to mix those readings and the songs into a coherent presentation.

“(Famed newspaper columnist, performer and humorist) Will Rogers talked about how, as Americans, we’re able to laugh at ourselves, whatever our situation is,” she said. “It used to be that people wrote songs about what was going on. We didn’t have TV, so people used to express their feeling about what was going on in songs. That was the golden age in American popular song.”

Osborne said when he and Voss found a particularly compelling piece of writing or music they wanted to use in the Chautauqua, their challenge was to find a piece of music or writing that complemented the first piece.

Hoyle Osborne says he is drawn to the Depression era because it forced Americans of all stripes to come together to seek solutions to the overwhelming problems of the day. (Photo: Daily Times file photo)

In the end, they found a lot more material than they had room for in a presentation that was scheduled to last 45 minutes to an hour. It was difficult eliminating some of those gems, they said, particularly given the short time frame they had to work with.

“I think we put it together in an awful rush,” Voss said of the Chautauqua. “But I think it came out well.”

Voss and Osborne faced a deadline of Oct. 29, 2009, which is when the Chautauqua was premiered in a performance at San Juan College that was arranged by political science professor Judy Palier. That date corresponded with the actual 80th anniversary of the stock market crash.

Osborne said, ironically, that date also may have marked the height of the Great Recession brought on the by the banking crisis, an event from which the country — including San Juan County — still suffers. The similarities between those two events did not escape him.

“There are so many things that come up in this program that correspond with contemporary situations,” he said. “In one of the Will Rogers quotes I deliver, he talks about how prosperous America is — even during the Depression, we have more food, more money and more houses than anyone in the world. So it doesn’t make any sense to have 10 million people starving. In many ways, that sounds like a Bernie Sanders campaign speech.”

Osborne said he finds the Great Depression such a compelling era because of its uniqueness.

“For me, that period of time is a case when the big problems got so big that people were forced to come together,” he said. “Of course, there were huge critics of President (Franklin) Roosevelt and his policies, but he had unusually widespread support. The people of America were ready to rally.

“The first stabs at addressing the problems (of the Depression) had been so inadequate, and conventional wisdom no longer worked,” Osborne said. “People saw they needed to do something drastic. … I find all of that inspiring — that we were able to come together for that period of time and make things better.”

As a professional musician, Voss said she always had a keen interest in the Depression era because of the music it spawned. In fact, most of the songs featured on her most recent album with Osborne, “Never No More Blues,” come from that period. She said it was while she was living in San Francisco in the 1970s that she became interested in the early music of the Carter Family.

“The music of that time period was very compelling to me,” she said.

But it was a conversation she had with an acquaintance that really piqued her interest in the era as a whole, she said.

“I was talking to a friend of a friend who said, ‘In order to understand our parents, we need to understand the Great Depression,’” Voss said. “So then, I read the Studs Terkel book, and I’ve always loved Woody Guthrie, who wrote so many songs about that era.”

Osborne said his parents were New Deal Democrats from Texas.

“So the kinds of things that Will Rogers talked about were really familiar to me,” he said.

Jane Voss says she and Hoyle Osborne aim to perform the songs in their Chautauqua with great authenticity and emotional impact. (Photo: Daily Times file photo)

Both performers said they realize there are many people who remain critical of the New Deal, but they said they tried to avoid editorializing in their Chautauqua.

“We tried to keep our own words to a minimum,” Osborne said. “We editorialize in that we edit the material because you’re picking and choosing what you’re putting in the program. But there was no political agenda.”

Voss and Osborne have performed “All In, Down and Out” approximately a dozen times at locations throughout the state, including Los Alamos, Silver City, Las Cruces, Raton, Las Vegas, Kirtland and Aztec. They said it has drawn a very positive response in all those communities, especially from older audience members who still have strong associations with that era.

“I think our programs are a bit like historical movies,” Osborne said, referencing such recent films as “Trumbo” and “Suffragette” that deal with the Hollywood blacklisting era and the women’s vote movement in Great Britain in the early 20th century, respectively. “Those movies have a strong emotional component, and that emotional component makes the audience more receptive to the factual component.

“It’s the same thing with these songs,” he continued, referencing the music in his Chautauqua. “There’s pleasure in listening to this music. People let their guard down and listen to a few minutes of good, solid information.” 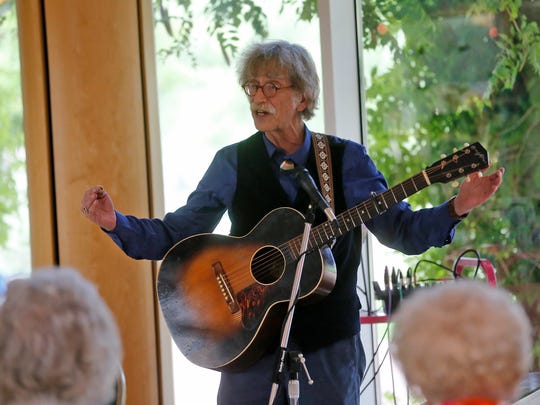 What: “All In, Down and Out: The Great Depression in Song and Story” Chautauqua performance by Jane Voss and Hoyle Osborne

Where: The Farmington Museum at Gateway Park, 3041 E. Main St.