"The Emerald Mile" is this year's selection for San Juan College's One Book, One Community program.

'The Emerald Mile' is this year's selection for the One Book, One Community project

Assistant Professor of English Danielle Sullivan says author Kevin Fedarko's "The Emerald Mile" likely will appeal to many local readers, which is partly why it was chosen as this year's selection for San Juan College's One Book/One Community program.(Photo: Mike Easterling/The Daily Times)Buy Photo

FARMINGTON — A 2013 nonfiction adventure book by a New Mexico author that chronicles the fastest boat trip in history down the Colorado River through the Grand Canyon is this year's selection for the One Book, One Community program at San Juan College.

Members of the college's One Book, One Community Committee announced the selection last week, ending a months-long process that originally included consideration of some 60 books.

Committee member Danielle Sullivan, an assistant professor of English at San Juan College, said several factors were considered by the eight members in selecting a book for the program. She said perhaps the most important one was whether the author could be lured to the campus to take part in program events.

"Is the author accessible to us?" she asked rhetorically. "We also compare (the books being considered) to the last book (in the program). Is there a connection to the campus? We want something that has a lot of different connections."

This year's selection covers most of those bases, Sullivan believes. "The Emerald Mile: The Epic Story of the Fastest Ride in History through the Heart of the Grand Canyon" not only unfolds among the familiar landscapes of the Southwest, it was written by Kevin Fedarko, a former Time magazine staff writer who lives in northern New Mexico. 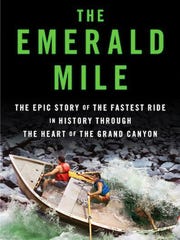 Kevin Fedarko's "The Emerald Mile" relates the story of the fastest boat ride ever down the Colorado River through the Grand Canyon in 1983. (Photo: Courtesy image)

The One Book/One Community program was launched in 2010 and is designed to build a sense of community and promote literacy by identifying one book per year that local residents are encouraged to read and discuss. Other selections over the years have included the dystopian novel "The Circle" by Dave Eggers, "The Distance Between Us" by Reyna Grande, which tackles the issue of immigration, and Laura McBrdie's "We Are Called to Rise," a novel that explores how several lives intersect at a fateful moment.

Sullivan said committee members thought "The Emerald Mile" — which provides a riveting, minute-by-minute account of how three river guides risked their lives by staging an unauthorized and nearly suicidal speed run through the canyon during the record spring runoff in the summer of 1983 in a wooden dory — would serve as an appealing read for people in the community. But they also recognized that its subject matter would provide numerous opportunities to engage the community in other ways, namely through a series of public events that are planned.

Sullivan did not have specifics on any of those yet. But she said the committee is coordinating with Ann Willmon, the outdoor recreation coordinator at the college's Health and Human Performance Center, and the local nonprofit River Reach Foundation to stage a series of river-related events, including a river cleanup, raft trips and other activities.

Fedarko's book also explores the history, construction and engineering of the Glen Canyon Dam at the north end of the Grand Canyon, and how the structure's supervisors were nearly overwhelmed by the challenges of dealing with so much runoff from the upper Colorado basin in the summer of 1983. Sullivan said that aspect of the book provides opportunities for science and math teachers to explore "The Emerald Mile" with their students.

"The Emerald Mile" will be the subject of a brown bag "literary lunch" at the college at some point, and Fedarko will be visiting here Oct. 17-18 to deliver a pair of multimedia presentations on his book and the canyon.

“Is the author accessible to us? We also compare (the books being considered) to the last book (in the program). Is there a connection to the campus? We want something that has a lot of different connections.”

At its heart, "The Emerald Mile" is an adventure story. But it also tackles various other themes — water rights and usage, drought, commercial development, outdoor recreation, conservation, the environment and energy development — that Sullivan said should strike a chord with people in this area, especially in light of the 2015 Gold King Mine spill.

She said she was impressed with how evenhandedly and thoroughly Fedarko presents those topics in the book, avoiding taking sides and instead telling the story through a number of perspectives.

"That was a really big factor (in the selection of the book)," she said. "We didn't feel like it would alienate anybody."

"We love the language," she said.

"The Emerald Mile" is widely available online, but Sullivan said several copies are being ordered for the San Juan College library.

For more information about One Book, One Community program, contact Sullivan at sullivand@sanjuancollege.edu.

Mike Easterling covers education, health and the environment for The Daily Times. He can be reached at 505-564-4610.