Arizona State University Professor Laura Tohe, pictured here weaving in her Mesa, Ariz., home in July, has been named the poet laureate of the Navajo Nation for 2015-1017.(Photo: Courtesy of Charlie Leight/ASU News)

FARMINGTON — Even though she always liked poetry, Laura Tohe didn’t start writing it until she had graduated from the University of New Mexico in 1975. Ultimately, she says, it was that art form’s economy of words that attracted her attention.

“I liked the language of poetry and how you could say so much in a few lines,” Tohe wrote recently in an email from Tempe, Ariz., where she now serves as an English professor at Arizona State University. “Poetry didn’t take as long for me to write as a story.”

The New Mexico native — Tohe grew up in the tiny Navajo Nation hamlet of Crystal, a community that straddles the San Juan County-McKinley County lines — seems to have polished her skill for crafting verse to a high degree over the ensuing years. In September, Tohe was named the new poet laureate for the Navajo Nation, a position she will hold through 2017.

She said much of the credit for her growth goes to Chicano writer Rudy Anaya, the New Mexico-born author best known for his 1963 novel “Bless Me, Ultima." In the 1980s, Tohe said she took a creative writing class from Anaya, and he helped her edit and polish one of her short stories, which wound up being published in an anthology.

It was a watershed moment in Tohe's development. She grew up writing in secret, never daring to dream that her work would wind up in print. She describes the experience as astounding.

“It was something I always wanted to do, to have my work in a book,” she wrote.

Anaya would come to serve as a mentor for Tohe, urging her to draw inspiration from her background.

“You have a lot of stories from where you come from,” Anaya told her.

That was when Tohe realized she had been surrounded by storytellers while she was growing up.

“No one had ever said that to me,” she wrote. “It was an epiphany. I had many family members who told stories all the time about relatives and about themselves. Some of it was gossip, but even gossip is a form of storytelling.” 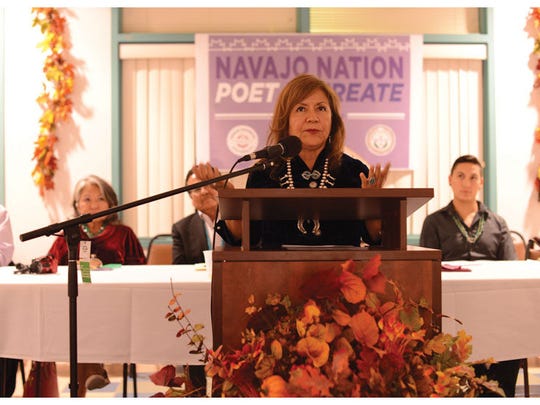 The notion that she could become a storyteller herself was an idea that Tohe quickly latched onto. Despite living two hours from the nearest library when she was growing up in Crystal, Tohe was an avid reader as a child, checking out books whenever she could. She gravitated toward fairy tales but fed her reading habit with the Richie Rich and Little Lotta comic books her mother would buy for her when family finances allowed. When she burned through those, she managed to talk her brothers into loaning her their Batman and Superman comics, which Tohe said she found a lot more interesting.

It never took this bright Navajo girl long to grow bored with material that didn’t challenge her. She’d had the same experience when she started classes at the little day school in Crystal, already bilingual, where she quickly learned how letters make sounds, essentially teaching herself to read. Tohe made short work of the Dick and Jane reading series that served as the classroom text — “The series was repetitive and rather boring,” she recalled — leading her teacher to put her in charge of her classmates who spoke only Navajo.

Of course, Tohe would go on to find material that resonated with her, building a small collection of Nancy Drew mystery books and enjoying the Madeline series. She found that reading allowed her imagination to take flight.

“Books took me to other places in the world and to other time eras,” she wrote.

But they weren’t the only creative influence in an upbringing that didn’t include television. As Anaya had suggested to her, Tohe later would come to understand that her family had provided that, as well.

She described a road trip she had taken with her grandparents down U.S. Highway 666 (now known as U.S. Highway 491, a roadway notorious for the mayhem that occurred on it) when she was a child. As the miles rolled by, Tohe’s grandparents recounted how a relative had died at this site or some other unfortunate incident had taken place at that site.

“It was a highway of stories,” she wrote. “We Diné people often associate stories with places and objects. I grew up with an oral tradition, and that was my biggest influence in developing my voice and my work as a poet and writer.”

It was Tohe’s mother who laid that out in plain terms for her, once telling her daughter, “You don’t have anything if you don’t have stories.”

Whether she realized it or not, Tohe was soaking up that wisdom and that storytelling tradition — elements she would learn to put to good use.

“My stories grew into poetry and sometimes prose poetry,” she wrote. “I’m grateful for having grown up with such a rich oral tradition.”

After graduating from UNM, Tohe earned her master’s degree and doctorate from the University of Nebraska. Other than a brief foray as a visiting faculty member at the University of Arizona in 2007, she’s been on the faculty at ASU since 1994. Tohe also has written four books — “Making Friends With Water,” “No Parole Today,” “Tseyi, Deep in the Rock” and “Code Talker Stories" – edited two more, and had her fiction, nonfiction and poetry published in dozens of journals and anthologies. 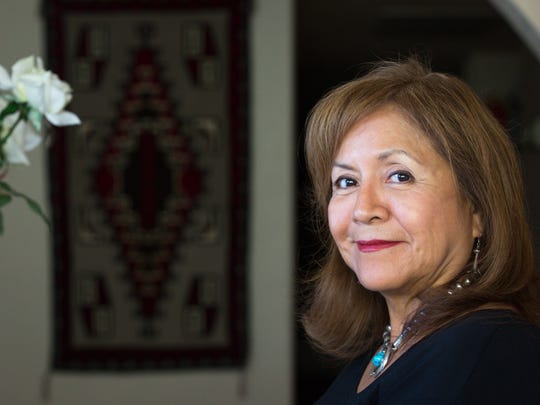 She also has mentored dozens of students, helping them get their first break in the publishing business. Tohe said her intent has been to serve the same role for those aspiring writers that Anaya did for her.

“I hope I have from the classes and workshops I’ve taught over the years,” she wrote. “As a co-editor of ‘Sister Nations, Native American Women on Community,’ I put together an anthology of women’s writing and currently work with UNM Press to support native writers’ work for publication. Some of the work featured came from young and established writers. In this time of my life, I find myself working in that, which I’m happy to do.”

In her role as poet laureate of the Navajo Nation, Tohe is in a position to influence even more aspiring writers. The position carries with it several official duties — including promoting literacy; promoting Navajo language and culture; promoting positive self-esteem among Navajo young people; promoting an awareness of, and appreciation for, Navajo poets and authors and their work; and participating in a public relations and education campaign to promote writing, poetry, literacy and the arts — but Tohe has some additional items for her agenda.

“I also want to promote getting the schools on the rez to include the Navajo writers and poets in their school curriculum,” she wrote. “Presently, I don’t think many Diné people, young and older, know who the writers are. Some of these younger writers have won prestigious literary awards, such as Sherwin Bitsui, who won the Whiting Writers’ Award and several writing fellowships. Others, like Orlando White, Tacey Atsitty and Esther Belin, are publishing new works. I think I owe it to the younger generation to know who the Diné writers are and how they are contributing to American poetry and literature, in addition to Navajo poetry and literature.”

Tohe officially began her reign as poet laureate in an induction ceremony on Sept. 11 at Navajo Technical University in Crownpoint, the institution that houses the poet laureate program under the guidance of the Office of the Navajo Nation Vice President. 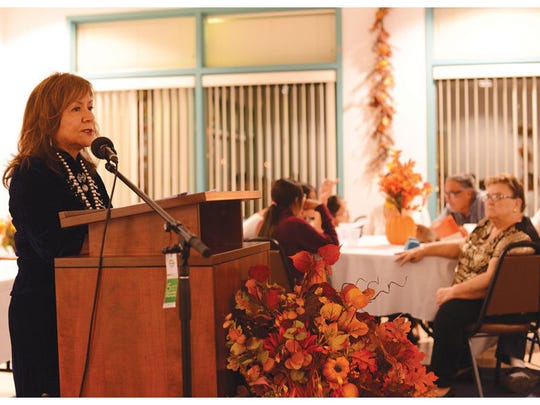 Tohe said she received a phone call last spring asking her if she’d be interested in being considered for the position, then got a follow-up call a few weeks later congratulating her on her selection.

“I am thrilled that I am the Navajo Nation poet laureate and that the Navajo Nation honors its poets and writers in this public way,” she wrote. “No other indigenous tribal nation has this honor. I am deeply grateful to my family, teachers and mentors who helped me get there.”

Many of those family members and friends were in attendance at that September ceremony, as was Luci Tapahonso, the Navajo Nation’s inaugural poet laureate. Tohe said some of her family members came from as far away as Florida, even Paris, to witness her induction.

As Tohe embarks on her two-year reign as poet laureate, she’s already at work on two more book projects — one long and one short — but she declined to discuss them in any detail, other than to say she simply needs time to work on them.

But she’s also dedicated to sharing the joys of writing, reading and enjoying poetry with others — something she’ll spend a lot of time doing for the next two years. Poetry can have a powerful effect on people, she wrote, citing the example of Chilean poet Pablo Neruda, who used to have throngs of women following him because they loved his poetry so much.

Dr. Laura Tohe is recognized as the next Navajo Nation poet laureate during the Navajo Nation Fair parade in Window Rock, Ariz., on Sept. 12 (Photo: Courtesy of Navajo Technical University)

“I think I love poetry because it’s language, it’s music, it’s healing, it’s orality, it’s performance, it’s meditation and it’s mysterious,” Tohe wrote. “I love the emotional aspects to it and the images that poetry can create.”