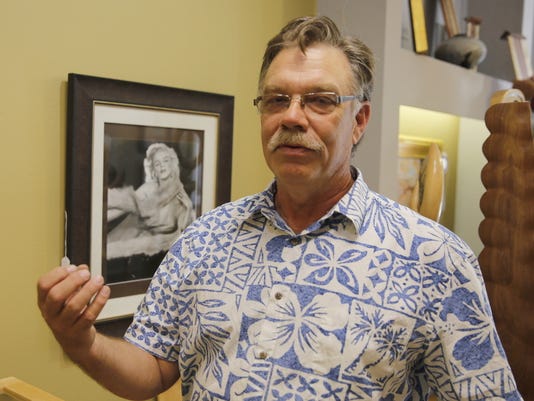 Kirtland artist Rick Conrad discusses his work at the Hubble & Barr Galleries, where his drawings will be featured during the summer art walk.(Photo: Mike Easterling/The Daily Times)Buy Photo

FARMINGTON — Forced into an early retirement a few years ago from his job in the oil field after going through back surgery, Rick Conrad has settled into a new field that is much less physically demanding, but far more taxing in terms of keeping his attention focused.

The Kirtland resident took up drawing again after 35 years and now produces hyper-realistic charcoal portraits that require intense concentration during their creation. Conrad's work will be featured during Friday's summer art walk at the Hubble & Barr Galleries at 206 W. Main St.

Conrad described his work as a passion but said he was only moved to return to the art world after being forced to give up his lifelong work in the transportation business. When his wife asked him what he planned to do with himself, he responded by conjuring up the creative skills he had abandoned decades earlier and quickly finishing a portrait.

"You never told me you could draw," she told him, astonished at the quality of his work.

Conrad's wife isn't the only one he has impressed with his drawings. Hubble & Barr Galleries co-owner Rod Hubble, an accomplished landscape painter and former art instructor at San Juan College, recalled that he immediately recognized how skilled the charcoal artist was when Conrad took a class from him at the college a few years ago.

"I taught him two or three simple things, but he already was very meticulous, very talented," Hubble said.

Hubble and partner Steve Barr, a woodworking artist, opened their gallery late last summer primarily as a means of providing more exposure for their own work, but they slowly have been featuring the creations of other local artists, as well. Hubble said he and Conrad stayed in touch over the years, and it wasn't long before he realized that Conrad's work would complement the art the gallery already featured.

"The strength of his work is its dark values, as opposed to the contrast with light," Hubble said. "It is very difficult to get black in a drawing. And charcoal is different from other drawing. You can't erase it. Everything has to be precisely where you want it to be."

The depth of the darkness in Conrad's work is extremely difficult to achieve, Hubble said, and that's what makes it so compelling.

Barr, Hubble's business partner, finds other things to admire about it.

"He creates images that are really succinct," Barr said. "He gets shadow lines, he gets eye quality. … There's a real black-and-white contrast. That's the brilliance of Rick's work."

Conrad will have only three pieces featured at the gallery during Friday's art walk — a portrait of actress Catherine Zeta-Jones and two of actress Marilyn Monroe — but he plans on adding up to five more at the gallery soon. He likes to work from photographs and says that preference probably stems from the fact that his father was a photographer.

He takes particular pride in reproducing skin and hair texture, and said he enjoys watching a portrait take on a life-like quality as he adds the various elements. 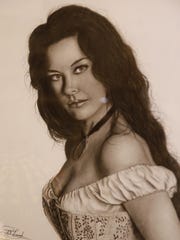 Conrad also has completed portraits of such figures as Angelina Jolie, John Wayne and Prince over the years, as well as a Native American woman he drew from an 1890s portrait. He plans to make Elvis Presley his next subject, he said.

Several other downtown galleries also have special events planned for the art walk. The Wal Art Gallery & Framing at 422 W. Main St. will feature the work of Raul Davis, who creates Native American art on vintage receipts and ledgers, and the Three Rivers Art Center, 123 W. Main St., will feature the jewelry of Edicia Rodriguez, as well as the work of several of its members.

The Artifacts Gallery, 302 E. Main St., will highlight the work of several local artists in its "Things That Go" exhibition, while the work of Four Corners Photographic Society members will be featured in another show. Music will be provided by Tennille's Violin House, and the members of the Farmington Writers Circle will be holding a networking event featuring readings and book signings.

Art walk maps can be picked up at all the participating venues.

Where: Several venues throughout downtown Farmington