FARMINGTON — The way he tells it, Santa Fe artist John Vokoun leads a life of routine. There is little variation in the time he gets out of bed, the way he takes his meals and how he chooses to work.

That’s all changed over the last four weeks. When Vokoun arrived at Chaco Culture National Historic Park near Nageezi to begin a month-long artist-in-residence program under the auspices of the nonprofit National Parks Arts Foundation, his commitment to doing the same things at the same time every day faded quickly.

“I’m normally very scheduled and balanced,” Vokoun said by phone from the park last week before explaining his routine has disappeared during his time there. “I can’t really explain why. Maybe it’s the nature of Chaco. It’s a good place to think deeply about the nature of things. My time here has been relaxed, though it’s definitely not a vacation. It’s been inspiring.”

Vokoun, who will deliver a presentation on his work this weekend, said some nights he finds himself working until midnight, while other days he’s up at 5:30 or 6 a.m. But he makes sure to spend at least part of each day exploring his surroundings and soaking them in.

“Every day, I go for some kind of hike or climb a mesa or go sit in one of the ruins,” he said. 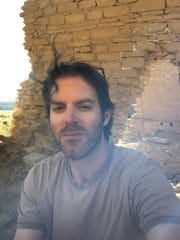 Artist John Vokoun says his time at Chaco Culture National Historic Park has led him to break his normal habit of sticking to a routine. (Photo: Courtesy photo)

While Chaco long has been a magnet for landscape painters and photographers, Vokoun brings a different and much less realist style to its environs. He’s a painter who has been greatly influenced by Bauhaus minimalism and abstract expressionism, and describes his work as very geometrical, contemporary and minimalist. Lately, he said, most of his paintings have been done in shades of white, gray, black and brown.

“Maybe that’s because I’ve worked in New Mexico for the last 14 years,” he said, laughing. “My earlier work is very colorful.”

But his time at Chaco also has altered the hues of his work, Vokoun acknowledged, explaining he’s been inspired by the bright fall colors of the bosque, the radiance of the sunsets and the brilliance of the clear blue sky he’s been witness to for the past few weeks.

When he applied for the residency, Vokoun indicated he intended to use his time at the park to explore symbolism and the roots of language.

“I’m interested in where does language come from and what are the things we share across cultures,” he said, citing corn as an example and explaining that every culture has a name for it.

Another of those objects that Vokoun described as transmutable — and one that is particularly applicable to the relatively isolated Chaco — is the night sky.

While almost everyone works on a computer nowadays, he noted, few people have any idea about how the language that allows them to operate is constructed. So for his presentation this weekend at the park’s visitors center, Vokoun said he will explore the simplicity of forms and the advantages of having a higher cultural understanding of what the future is about – and make an attempt to reconnect that with nature.

One of the things that strikes him about Chaco, Vokoun said, is that there is so much mystery about it. It was a large settlement for the prehistoric American Southwest, “but we have such a rudimentary concept of what happened here without a written language,” he said. “What we have here in terms of written documentation is very loose. This culture had a lot of innovation, but we don’t have that many clues about what went on.”

Vokoun pointed out the irony of the fact that while the modern world offers people more communication tools than ever, many people have never felt more isolated. His own attempts to reconnect with nature often have led him to put aside his painting and resort to the comparatively primitive approach of making graphite drawings on paper when he explores the mountains, mesas, canyons and trails of the Southwest.

The entirety of Vokoun’s residency hasn’t been spent at Chaco. He said he drove to Farmington two weeks ago and was impressed with its comparative lushness. He wondered aloud why Puebloan people would build a ceremonial community in the middle of the desert, 50 miles from a place where three rivers come together and where survival might have been considerably easier.

Vokoun had visited Chaco three times previously, but the experience of living in a place for several weeks as opposed to simply visiting it for a few days provides a luxury of time he didn’t have before, he said.

“The first thing that happens as a resident here is you get the chance to make connections with the park staff,” he said. “You get to have regular conversations with the archaeologists and historians here and develop a little deeper understanding of this place than I have in the past.”

That has allowed him to realize that Chaco is much more than the commonly recognized pueblo ruins that populate its grounds. 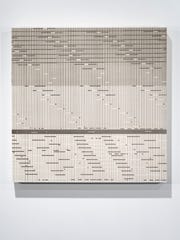 Artist John Vokun says he normally works in such colors as white, gray, black and brown, as typified by his piece "Reconstruction," but the color he's seen this fall at Chaco Culture National Historic Park has inspired him. (Photo: Courtesy image)

“For many, many square miles, there are archaeological sites like crazy,” he said. “When you really start digging into it, there’s a huge connection of roads and sites that run all the way to Gallup, Canyon de Chelly, past Farmington, past Aztec and to Mesa Verde. So I’ve got a little more context for how everything has intersected here.”

Mostly, though, he said his residency has been an exercise in digging into his own ideas and themes while developing concepts and ideas for his work. Vokoun’s residency has come at a serendipitous time, as he turned 40 a few days ago.

“I think that’s an important time to sit and consider where you are with your life and what’s happening next,” he said. “This has been an amazingly beautiful time for introspective thinking and sitting on top of a mesa overlooking a vast, ancient canyon with a moon rising. It’s been a mind-blowing experience. I’ve been in New Mexico long enough to appreciate it, but I’m still floored all the time by the beauty of this place. It’s a rare, dramatic place, and it has fully renewed by love for New Mexico.”

What: Presentation by artist in residence John Vokoun as part of the National Parks Artists Lecture Series

Where: The Visitors Center at Chaco Culture National Historic Park, off County Road 7900 southeast of Nageezi