Farmington resident Terry Munter makes unique, hand-crafted jewelry pieces that are designed to be worn on the wrist. 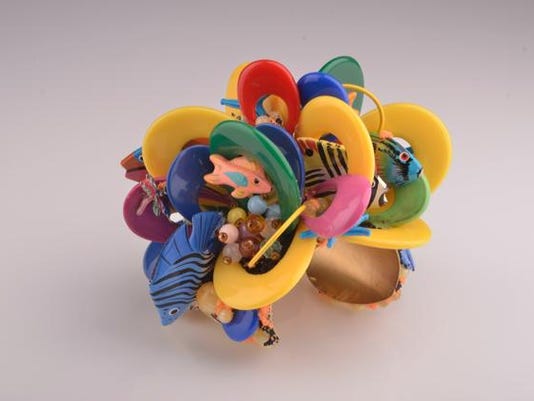 Terry Munter says the pieces she will be displaying in a show opening this weekend at the Feat of Clay artists co-op and gallery typically contain between 100 and 150 elements and take between 20 and 25 hours to complete.(Photo: Courtesy image)

FARMINGTON — Farmington resident Terry Munter has been making her unique, hand-crafted jewelry pieces that are designed to be worn on the wrist for about two and a half years. But it wasn’t until approximately a year ago that she began to think of the pieces she crafts as anything out of the ordinary.

“I didn’t know I was an artist for about a year and a half,” she said, laughing. “But when so many people called it that, I thought, ‘Oh, maybe I am an artist.’”

Munter, who will be showing her work in an exhibition that opens this weekend at the Feat of Clay artists co-op and gallery in Aztec, more or less stumbled across her style. The veteran Mary Kay cosmetics saleswoman and former Alaska bush pilot said she always had been into jewelry and “all things girl,” but it wasn’t until she began experimenting with using different glues that she came up with the idea of creating her elaborate, cuff-like pieces that rely heavily on vintage, salvaged elements.

She set herself a goal of making 30 such pieces in a month, and by the time Munter had completed the 20th piece, she said she realized she was having such a blast and had found a form of expression that suited her perfectly.

“It’s very important to have your own voice,” she said.

Munter’s work is complicated, time consuming and very colorful. Every available surface has some sort of component attached to it, and the pieces are attached to a plaque bearing the name of her company, EYE IMPACT TM.

She said it isn’t unusual for her to employ between 100 and 150 elements in a single piece, so minimalism is definitely not a characteristic of her work.

“When people tell me, ‘I’d like something delicate and not very complicated,’ I tell them, ‘Go to Etsy (a website specializing in the sale of handmade or vintage items and supplies). That isn’t what I do,’” Munter said.

Some of the pieces take as little as 10 hours to complete, but her larger pieces typically require 20 to 25 hours of work, she estimated. Then again, given the way she approaches her work, who knows? Munter likes to work on up to 10 pieces at the same time, moving from piece to piece as the mood strikes her.

“I’ll spend five minutes here, 25 minutes there,” she said. “So it’s a little hard to quantify.”

Many of the pieces she creates convey a sense of humor, and Munter specializes in making what she calls “heartifacts” — commissioned pieces that are designed to evoke memories and emotions through the use of specific elements that have great meaning to the client.

“I try to create something that tells the story of their life in it,” she said. “That’s a blast for me. Of course, I have trouble keeping those around.”

Many artists don’t like doing commissions for clients for that reason — upon completing the piece, they’re obliged to sell it to that individual. But Munter said she enjoys that process.

Drawings and paintings by Paloma Baron are included in a new show opening this weekend at the Feat of Clay artists co-op and gallery. (Photo: Courtesy image)

While many collectors insist on treating her work like art that is only intended to be displayed, Munter said she designs each piece to be worn, which means it must meet a certain standard of durability.

That is why she is so careful about the glue she uses. Different elements respond more or less effectively to different adhesives, so Munter said she has been known to employ up to six glues on a single piece.

She even has her own quality-control department. Munter lets a friend “test drive” each piece to determine whether it will stay together.

“Lordy, she is so hard on jewelry,” Munter said, laughing. “So the question is always, ‘Can my friend Barb wear it without killing it?’”

That desired degree of durability can be difficult to achieve in some instances, particularly on pieces that have a high profile and are prone to snagging or works that have movable parts.

“I love movement, so it’s rare that I don’t have something that dangles or moves on (a piece),” she said.

Munter described all of her pieces as strange, but even by that standard, some are more unusual than others. She cited one such work, titled “Integrity,” that is patterned after a Fabergé egg. The centerpiece is a broken ornament, and Munter said she attached a large pearl to the inside before mounting the repaired ornament.

“Should it ever open, there’s a pearl inside, and isn’t that was integrity is — doing the right thing even though nobody ever sees it?” she asked.

A second oddity, titled “Primordial Ooze,” started as a paperweight. Munter described it as having a “funky, yellow-green” color and said it was inspired by Genesis 1 and 2.

“In the beginning, it was without form and light,” she said, paraphrasing the Bible. “It looks like something oozing up out of the mud. It’s got an otherworldly look to it.”

Munter no longer has any trouble thinking of herself as an artist, but she maintains she fits that definition only in a specific way.

“I’m a one-trick pony,” she said. “I don’t paint. And I don’t work in the medium of clay because everything comes out an ashtray.”

The Feat of Clay gallery in Aztec will be featuring the art of Tom Schilz, who works in a variety of media, including stone carvings. (Photo: Courtesy image)

What: Opening reception for a new show featuring the work of Terry Munter, Tom Schilz and Paloma Baron

Where: The Feat of Clay artist co-op and gallery, 107 S. Main Ave. in Aztec