The newly renovated Artifacts Gallery will be the focal point of the Holiday Art Walk this weekend in Farmington. 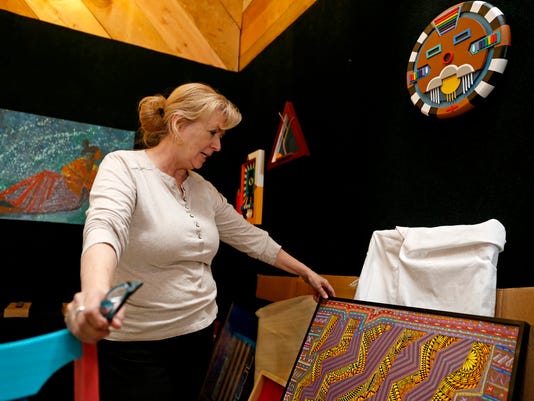 Bev Taylor looks at the artwork that will go up in the new Boardwalk Gallery on Nov. 21 at the Artifacts Gallery in downtown Farmington.(Photo: Alexa Rogals/The Daily Times)Buy Photo

FARMINGTON — It was while reading Ray Oldenburg’s 1989 book “The Great Good Place: Cafes, Coffee Shops, Bookstores, Bars, Hair Salons, and Other Hangouts at the Heart of a Community” a few years ago that Artifacts Gallery owner Bev Taylor began to consider how her business could take on the role of community gathering spot that the author focuses on in his book.

Taylor explained that concept last week while continuing the cleanup at her gallery, which recently underwent a major renovation, adding some 3,300 square feet of space. Taylor said Oldenburg writes that most people typically already have two places — home and work — where they feel comfortable and connected. But the author maintains most of us still have a strong need for another “great, good place” in our life to feel complete.

“Everybody needs a third good place — a coffee shop or a bar or a little corner diner where you can go and meet friends,” Taylor said. “It’s non-intimidating, and it’s got a friendly atmosphere. You feel comfortable. You can have a good time and a few laughs.”

That was the explanation Taylor settled on when she tried to explain what she hopes her renovated gallery will become for many people here. Work on the project recently was completed after several months, and while Taylor was still sweeping floors and moving scaffolding last weekend, she was eager to see how the space will be received by the public when the gallery plays host to a new show during the Holiday Art Walk, which is being held in conjunction with Small Business Saturday on Nov. 28.

“It’s not church, it’s not work and it’s not home,” she said of that community-space notion. “It becomes a neutral gathering area.”

The Artifacts Gallery, 302 E. Main St., long has been an anchor of the local art community, serving as a regular stop on art walks and showcasing the works of dozens of local artists. But as Taylor surveyed the cavernous interior of the 1908 building — which was a lumberyard and hardware store for decades — she realized it could be more than that.

Owner Bev Taylor, left, and Tara Churchill pose for a photo in the newly renovated Chile Shop on Nov. 21 at the Artifacts Gallery in Farmington. (Photo: Alexa Rogals/The Daily Times)

“We’ve opened up what has historically been called the Alley,” she said, describing the renovation. “There used to be a drive-through alley in the building. People would load up their lumber and their parts or whatever else they bought and drive through the front of the building, which had double doors. Eventually, they closed the front doors and added glass.

“So the usable part of the building has been the perimeter, and the Alley has been, for the last 20 years, a giant garage where we stored cars or trailers,” she continued. “We decided it was time to do something about it.”

As part of the renovation, the wall that separated the Alley from the public part of the building was removed, and all that area has become gallery space. Taylor said the Alley featured a boardwalk floor, and that material has been cleaned up and refurbished, giving the new space its name — the Boardwalk Gallery.

Taylor said the double doors in the back of the Alley have been replaced by glass, allowing far more natural light into the building, and a coffee shop, and workshop and meeting space have been added, along with new heating, ventilation and air conditioning equipment, new plumbing, new electrical wiring and a new fire suppression system.

Taylor said most patrons of the business didn’t even realize the Alley space existed and are likely to be wowed when they step into the renovated area for the first time.

“They had no idea what was behind those walls,” she said.

Saturday’s Holiday Art Walk will give them the chance to find out.

“We want this to be a new community gathering space for people,” Taylor said. “We’ll have meeting spaces, little areas where you can gather with small groups, and on the north end of the building, there’s a little workshop space. I missed not being able to bring in better-known artists for workshops. We used to do that, but all that space has been rented our for studio space.”

Taylor said the entirety of the new space will be available for rent for special events, and she’s already booked it for a wedding reception in January.

She’s particularly excited about the coffee shop, though she was still waiting for various licenses to be approved last week and didn’t know when it would begin operation. Taylor said it’s likely that aspect of the business will be open earlier than the gallery itself, perhaps 7 or 7:30 a.m., and live music will become a regular attraction.

Taylor is particularly proud of how the renovation didn’t alter the character of the building. The ceiling in the Boardwalk Gallery is open to the rafters, allowing it to retain that rustic, lumberyard feel.

“We spent lots of time and energy in maintaining the historic feel of this space,” she said. “When we need to replace some wood, instead of buying a new board, we went out back and found (a suitable) old board.

Bev Taylor moves artwork around in the newly renovated Chile Shop with the new gallery seen in the background on Nov. 21 at the Artifacts Gallery in downtown Farmington. (Photo: Alexa Rogals/The Daily Times)

Taylor refers to the structure as “the building that built Farmington,” explaining that it has been in her husband’s family since its inception and that many longtime residents already feel an attachment to it because of its status as an early commercial hub. She hopes those who have never been in the gallery before will appreciate its historic flourishes, as well as its potential for breathing new life into the downtown district.

Taylor began considering the project three or four years ago, and it took another year of planning before work was ready to begin. She said she hadn’t totaled the bills that arose from the work, so she doesn’t know how much it cost, but she acknowledged it was done at considerable expense.

“It’s been quite an involved process,” Taylor said. “So we think people will be pleased, will be happy.”

'Cedar Mesa Ruins,' a mixed-media piece by Gilmore Scott, is part of the 'Local Treasures' exhibition on display at the Artifacts Gallery. (Photo: Courtesy image)

“Their work is everything from very traditional to extremely abstract,” Taylor said, adding that it was her understanding that the 50 or so pieces in the exhibition are all new.

This untitled encaustic mixed-media piece by Michael Billie will be displayed at the Artifacts Gallery as part of its 'Local Treasures' show. (Photo: Courtesy image)

Artifacts also will be presenting another show, “Winter White,” at the same time. Both shows will remain on display for several weeks.

The Holiday Art Walk is the only one of the quarterly events that doesn’t take place on a Friday evening. Art Walk committee member Liz Stannard said the Holiday Art Walk was held on a Saturday for the first time last year, and it went well enough so that downtown merchants wanted to try it again this year. 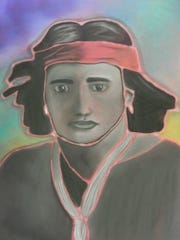 This glue drawing by Chantel Pine will be featured at a Native Project at 119 W. Main St. during this weekend's Art Walk. (Photo: Courtesy image)

Holding the Art Walk in conjunction with Small Business Saturday — a national event designed to challenge Black Friday and Cyber Monday by encouraging shoppers to patronize small, locally owned and operated businesses on that day instead of big-box retailers — seemed like a good fit, she said.

The timing of the Holiday Art Walk also allows it to avoid competing with a December schedule that is crowded with various other public and private events, Stannard said.

Now that her gallery is well equipped to handle increased traffic, Taylor said she has pushed successfully to increase the frequency of the Art Walks, which will be completing their eighth year with this event.

Artwork by Irving Bahe will be featured at A Native Project at 119 W. Main St. during the Art Walk this weekend. (Photo: Courtesy image)

She said the walks will be held on a monthly basis beginning in February, and she hopes that increased frequency helps downtown businesses maintain the momentum the Art Walks have helped generate. When the events are held only once every three months, she said, it’s hard for visitors to get in the habit of going downtown.

“We’ll be having our woodworkers show in February and March, and we will have a themed show every month, along with a featured artist and, hopefully, a specialty workshop every month.”

Taylor said she never regretted undertaking the renovation project, despite its length and cost.

“No, because we were very determined,” she said. “It was a vision, and it wasn’t anything we could stop in the middle of.”

Part of what motivated Taylor and her husband was a desire to secure the building’s future before they passed it on at some point.

This candle holder by Scott Newcomb has been donated for the fundraiser at the Three Rivers Art Center during this weekend's Holiday Art Walk. (Photo: Courtesy image)

A total of 16 venues are taking part in the Holiday Art Walk, including the Three Rivers Art Center, 109 N. Allen Ave., which will feature the work of its gallery members, along with fundraiser items that will be sold to help cover the operating costs of the center.

Additionally, the space at 119 W. Main St. will house exhibits featuring the work of students of Kirtland art teacher Shirley Pelot and work created by Native American artists from A Native Project.

A postcard map displaying all the Art Walk stops and artists will be available at any participating venue.

Where: Sixteen venues across downtown Farmington