Members of a local fabric arts collective are showing their work at the Feat of Clay Co-op and Gallery in Aztec.

'Spider Woman' by Shari Schmitt will be featured in the show opening Friday at Feat of Clay Co-op and Gallery in Aztec.(Photo: Courtesy image)

FARMINGTON – Joyce Mills has always maintained that, no matter how many clubs, gloves, pairs of shoes or other pieces of equipment golfers like to cart around, they have nothing on quilters when it comes to accumulating tools of the trade.

“Same with skiers,” she said, laughing.

Mills is one of approximately eight members of the Artful Bee fiber arts collective that will be showing their work in an exhibition opening Friday, Oct. 23 at the Feat of Clay Co-op and Gallery in Aztec. Mills has been with the group since it became an official organization a year ago, but she had been getting together with several other members of the group informally for five years before that.

This quilted and beaded sunflower image by Gail Aspormonte is featured in an exhibition by members of the Artful Bee opening Friday in Aztec. (Photo: Courtesy image)

She said the reason for making it a formal group had to do with an expansion of styles on the part of members.

“A lot of the gals are changing their modus operandi,” she said. “They’re going more to art quilts than utility things.”

It would be a mistake to label the members of the Artful Bee as only quilters, though many of them are, including biologist Donna Schmitt.

“I sort of view myself as the least creative,” she said. “We have painters and people who do other things. I just do quilting. We teach each other, but they do more of the teaching, and I do more of the learning.”

Schmitt, who plans on showing eight or nine pieces in the exhibition, said she values the influence other members of the group have had on her work. 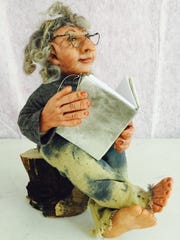 This doll by Susan Bowman is one of the pieces that will be featured in a show openig this weekend at Feat of Clay Co-op and Gallery. (Photo: Courtesy image)

“I’ve gotten so much more creative and just better at what I do,” she said.

Her background in biology also has had an influence on her work. Schmitt and her husband make a habit of traveling to South America during the summer to study birds, and she has incorporated some of what she’s seen there into her quilts. One of her pieces is based on a photograph she took much closer to home at the Bisti/De-Na-Zin Wilderness, while others feature dragonflies or sunflowers.

“I get a ton of my inspiration from nature and my trips,” she said. “The other women always laugh at me because I have to have my dragonflies anatomically correct.” 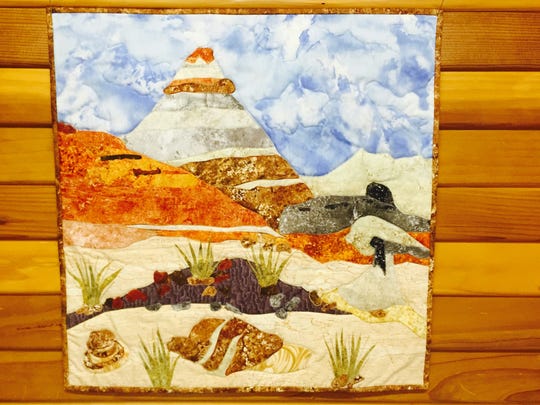 'Bisti Hoodoo' by Donna Schmitt is part of a showing of works by members of the Artful Bee fiber arts collective opening this weekend in Aztec. (Photo: Courtesy image)

She said the meticulous nature of her work as a scientist is something she has been able to put to good use in the precise world of quilting, but lately, she’s been trying to let go of that approach, to a degree, when it comes to the figures in her work.

“I’ve probably learned to let go a little bit,” she said. “I try to be as accurate as I can, but the other women tell me nobody’s going to notice.”

Another longtime member of the group, Linda Barlow, said the collective has grown into a regular monthly gathering of 10 to 12 artists, though not everyone will be showing their work in this exhibition. Like Schmitt, she said she’s derived a great deal of inspiration from other members over the past several years.

“Some of these ladies are amazing artists,” she said. “I was a banker, so deep down inside all these numbers, there’s an artist waiting to get out.”

There’s no overstating the influence her fellow members of the Artful Bee have had on her work, Barlow said.

“I’m not sure I had a style to begin with,” she said. “There are so many things I’ve enjoyed trying … I’ve decided to try different fabrics or different ranges of color.”

Barlow will have four pieces in the show, one of which is a quilted wall hanging featuring dimensional poppies with hand-dyed fabrics and beads. The other three pieces will feature hand- and machine-felted elements or wool. One portrays a vase, another a landscape and the third features a chicken with beaded legs.

Mills said she used to work primarily in quilts, though she has recently branched out, creating bags and scarves. She enjoys the techniques she sees demonstrated at Artful Bee meetings — painting, sculpting, braiding and beading, among them — and counts the supportive nature of the collective as perhaps its most important feature. 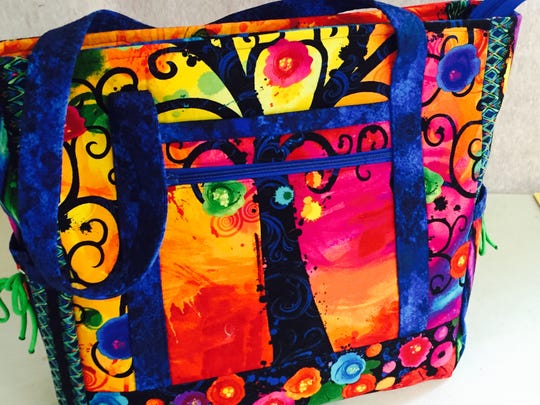 'Tree of Life,' a bag by Joyce Mills, will be included in a showing of work by Artful Bee members this weekend in Aztec. (Photo: Courtesy image)

For at least one member of the group, Shari Schmitt, sister-in-law of Donna Shmitt, this will be the first time her work has been shown as part of an exhibition. The former Santa Fe kindergarten teacher was greatly influenced by her time in the state Capitol.

“I’ve always found Santa Fe inspiring,” she said, explaining that she lived there for 31 years and was introduced to quilting by her mother about a dozens years ago. “Everywhere you look, there are bright colors. There are probably a lot of characteristics there that relate back to quilting – the color and the people.”

Shari Schmitt is planning on showing four pieces in the exhibition, two of which are fabric collages of female figures — one a Japanese geisha girl and the other a Navajo woman.

This painted gourd by Shari Schmitt is part of a showing of works by Artful Bee members opening Friday at the Feat of Clay Co-op and Gallery. (Photo: Courtesy image)

She compared the experience of quilting to putting together a puzzle, but said the thing she enjoys most about being a quilter has nothing to do with the creative process.

The Artful Bee exhibition will remain on display at Feat of Clay through Nov. 14. 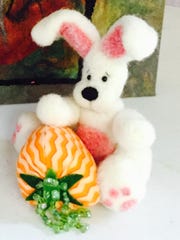 This felted bunny by Billie Whitlow is included in a new show opening this weekend in Aztec. (Photo: Courtesy image)

What: Opening reception for an exhibition by members of the Artful Bee fiber arts collective