Los Alamos historian and author Nancy Bartlit will deliver a presentation on Navajo code talkers on Oct. 11 in Aztec.

Navajo code talkers participate in the Code Talker Day celebration in Window Rock, Ariz., in November 2014. The work of the young Navajo marines during World War II will be discussed in an Oct. 11 presentation in Aztec by Los Alamos historian Nancy Bartlit.(Photo: Daily Times file photo)

FARMINGTON — Longtime Los Alamos resident Nancy Bartlit has lived a life not only largely focused on, but in many ways dictated by the events and aftermath of World War II.

The historian and author grew up in New Jersey in the early days of the war and still vividly recalls her father's victory garden and the necessity of keeping the shades drawn at night to maintain blackout conditions. Her father went on to work in Oak Ridge, Tenn., now known as the birthplace of the atomic bomb.

She later graduated from college with a history degree, then taught in Japan for two years. After marrying, she and her husband moved to Los Alamos to facilitate his work at Los Alamos National Laboratory, where much of the top-secret Manhattan Project design work was done and where Bartlit often served as a translator for visiting Japanese scientists after the war.

When she was pursuing her master's degree from the University of New Mexico and working on a book on the war with co-author Everett Rogers, she wound up visiting a number of the more prominent World War II sites in Europe and the Pacific, including Okinawa, the Philippines, Iwo Jima, Saipan and Guam. She also interviewed survivors of the Bataan Death March and the Japanese internment camp in Santa Fe, as well as many of the military and civilian personnel who worked on the Manhattan Project.

But the experience that left perhaps the greatest impression on her was her interviews with Navajo military veterans who served as code talkers during the war in the Pacific Theater. Bartlit will elaborate on what she learned during a presentation Wednesday, Oct. 11 in Aztec during the monthly meeting of the San Juan County Historical Society that is open to the public.

"I'm very, very proud of these men — very proud of what they did and the significance," Bartlit said during a telephone interview Saturday from her home in Los Alamos, noting that most of the Navajo code talkers served for the duration of the conflict because their service was considered invaluable to the war effort.

Bartlit relishes her opportunities to deliver her presentation — called "Silent Voices of World War II" — in large part because so many of those Navajo veterans were prohibited from discussing their experiences for national security reasons, even years after the war ended.

But Bartlit has made sure their story is known, partly through her book with Rogers and mostly through the delivery of her presentation in cities across the state under the auspices of the New Mexico Humanities Council's Chautauqua program.

During her 90-minute presentation, which concludes with a Q&A session, Bartlit describes how an original contingent of 29 young Navajo Marines developed a code they spoke in their native tongue to communicate Allied orders and intelligence in the Pacific during the war. That original group later was expanded to between 350 and 420 members, all Navajo Marines, and the enemy was never able to decipher those communications, contributing a major assist to the Allied victory.

Bartlit considers it the height of irony that the skill those young Marines put to such vital use in World War II — the ability to communicate with each other in their own tongue — is something that so many of them were prohibited from doing when they were sent to boarding schools as youngsters to learn English and be scrubbed of their Navajo influences and culture. In some cases, those Navajo youngsters were even beaten for speaking their native language, she said.

Bartlit noted that fact didn't escape the Navajo code talkers with whom she had spoken.

"They found the irony, too," she said. "And they laugh at that. They have a sense of humor." 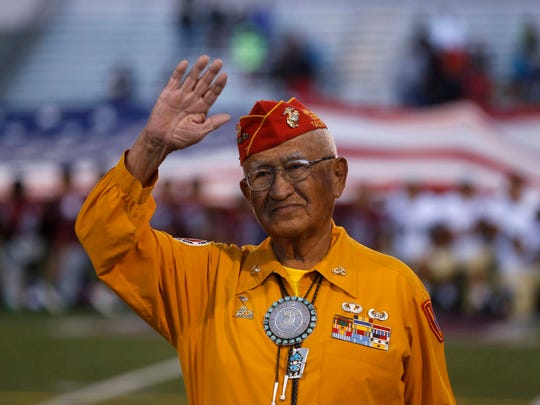 Navajo code talker Thomas Begay is honored Sept. 5, 2015, during a ceremony for Navajo veterans at Chieftain Stadium in Shiprock. Begay was one of hundreds of young Navajo marines who communicated Allied orders and intelligence in code in the Pacific during World War II. (Photo: Daily Times file photo)

Bartlit is well versed in almost all the specifics of the World War II Pacific Theater of Operations, but she takes particular interest in the aspects that involved New Mexico and its residents. She attends the annual ceremony in Santa Fe that brings together survivors of the Bataan Death March, and she is considered an expert on the Santa Fe internment camp where many Japanese males were sent during the war.

Even with the benefit of hindsight, she finds that latter move a rather curious one, as well.

"There's the irony of the fact that Japanese men from the West Coast and Hawaii were brought inland to Santa Fe, which was the gateway to the largest secret in World War II," she said, referring to the city's proximity to Los Alamos and the Manhattan Project work.

San Juan County Historical Society board member Patty Tharp said she has been in contact with officials of the Shiprock Historical Society, and she has been invited to attend that group's meeting on Tuesday to alert members about Bartlit's presentation. She hopes many local Navajo residents are compelled to attend, and she encourages anyone with an interest in the history of the county to join the society.

Bartlit said her standing as a historian usually leads her to take a dispassionate approach to her subjects, and she prides herself on leaving out personal judgments while focusing on why decisions were made the way they were. But she acknowledged she has a difficult time doing that when it comes to the code talkers, whose story she considers compelling.

"What they did was absolutely astonishing," she said. "I kind of lose myself … instead of being a historian telling a story. We so relied on them."