FARMINGTON — Bart Wilsey likely wasn't going for understatement when he said, "People are fascinated with money. 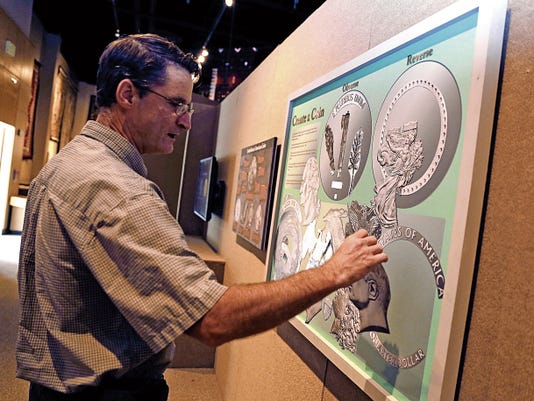 FARMINGTON — Bart Wilsey likely wasn't going for understatement when he said, "People are fascinated with money."

Instead, the director of the Farmington Museum at Gateway Park was describing the reaction museum visitors have had to the new "Mint Condition: Appreciating and Collecting America's Coins" exhibition that opened Aug. 18, a show that focuses on the history of American coin production and collecting. It features a portion of a 300-coin collection recently donated to the museum by local resident Vance Klassen.

"We got our first coin collection donated to us last year, and we've been working on the exhibit ever since just to kind of show off the collection and provide information to people about collecting," Wilsey said.

The show includes currency that dates from the mid-19th century to the present day. It features a number of interactive displays, as well as films, a penny puzzle and a computer that offers visitors the chance to scan unusual or old currency and perhaps have it identified and analyzed. He said there are no guarantees the computer will be able to identify a given coin or piece of paper currency, but in some cases, it is capable of displaying a coin's metal content, or the cotton or linen content of paper currency.

"We've had varying success with that," Wilsey said.

The show doesn't feature exclusively antique coins or those made from precious metals. It also features objects of curiosity, including the steel pennies minted in the United States during World War II because so much copper was required for the war effort.

Wilsey said the entire exhibition is different from anything the museum has done in the past even though it has put together many of the shows, as opposed to relying on traveling exhibitions. When the 300-coin collection was donated to the museum by Klassen, he said museum officials immediately knew they wanted to build a new show around it.

Not all of the coins in the collection are on display in this show. Wilsey said one notable coin that isn't featured, because it doesn't fit in the show's theme, is one from the Roman era that dates to approximately 800 A.D. But museum officials have plans to create other coin- and currency-related shows in the future, he said, so there is a chance that item will be available for viewing at a later date.