FARMINGTON — Allie Young was just finishing her freshman year at Kirtland Central High School in 2010 with her... 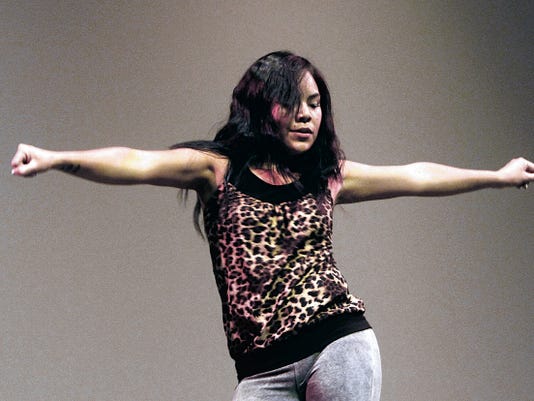 Asia Soleil Yazzie performs a dance routine during the inaugural Survival of the First Voices Festival in July 2014 at the Henderson Fine Arts Center at San Juan College in Farmington.(Photo: Jon Austria &#8212; The Daily Times)Buy Photo

FARMINGTON — Allie Young was just finishing her freshman year at Kirtland Central High School in 2010 with her pal Jourdan Bennett-Begaye when the time came to plan something special for the final meeting of a movie club they had started at the school. Young would be going to school out of state the next fall, so they both knew the usual ho-hum club agenda wouldn't do.

The Movie Club was important to them both. Young and Bennett-Begaye, both Navajo, had met and become fast friends while serving as office aides in middle school, and the club they started at KC was supposed to be unlike any other organization on campus. They even had an acceptance process by which prospective members had to fill out an application and be invited to join.

It was designed to be an organization for serious film fans only. Members would get together once a month, have dinner somewhere, then adjourn to a local theater or a member's house to watch a film or TV show and analyze it later.

It was Bennett-Begaye's father who came up with the idea for the final get-together.

"The last Movie Club meeting was huge," Young said last week, giggling. "Jourdan's dad rented a limo for us. We all went to Chili's and had dinner, then we went to the movie."

"I was a big Stone Cold Steve Austin fan," she said. "It was 'The Longest Yard.'"

While it wasn't exactly art-house fare, that whole Movie Club experience was the first brush with organizing an arts-related endeavor for the two girls. It would not be their last.

Years later, the two women would found a free conference for Native young people — the Survival of the First Voices Festival — that encouraged students to use art and media as mass communication tools to preserve their indigenous culture, reclaim their history, build a strong cultural foundation, change the misrepresentation of Native Americans and increase the Native American presence in mainstream society.

The second edition of that festival takes place this weekend in Kirtland. Bennett-Begaye said the purpose of the event is to inspire Native young people, as much as anything.

"There's a huge message we want to put out to kids," she said last week by phone from Syracuse, N.Y. "Education and is important, and whatever you love, you've got to go for it."

That's exactly what Young and Bennett-Begaye did, even as they remained friends through their college years and afterward. Bennett-Begaye graduated from Fort Lewis College in Durango, Colo, with a degree in athletic training and English-communication, while Young graduated from Dartmouth College in Hanover, N.H., with a degree in film and media studies. Bennett-Begaye wound up pursuing a graduate degree at the S.I. Newhouse School of Public Communications at Syracuse University, while Young went to work in the television business in Los Angeles.

It was during the early spring of 2014 that Bennett-Begaye flew to the West Coast to help Young drive back to New Mexico. Along the way, the two friends struck up a conversation about an indigenous new media symposium they had watched online that had been held at the New School at New York University. A Native student in Seattle had posted a comment on his Twitter account about how he wished he had been able to attend, but since he was an entire continent away, he couldn't make it.

"I told her, 'We should do something like that,'" Bennett-Begaye said.

Four months later, that offhand remark had developed into the first Survival of the First Voices Festival, a three-day event that took place at San Juan College. Through workshops, presentations and performances, the event was designed to create educational and creative opportunities for Native American young people by providing them with the resources and connections to pursue higher education and to follow their passion.

The two women were hoping for 150 people to show up over the weekend. They were astounded when 1,000 did — most of them attracted by the long list of Native creative types who performed.

The event was so successful they decided to do it again this year, though the challenges of mounting such a big endeavor were beginning to take a toll on both of them last week. Young — who lives in Los Angeles and works as a production assistant for Nickelodeon but who had returned to the area a couple of weeks ago for a visit — was attending to as many of the in-person tasks as she could, while Bennett-Begaye was trying to hammer out the other details from New York before returning to the Four Corners this week.

Both said there was no question it was worth the effort.

"We want to show (Native young people) that there's more out there than just staying on the rez," Bennett-Begaye said, recalling many of the disheartening stories she heard from Navajo kids when she worked for Capacity Builders, a local nonprofit organization that seeks to transform Native American youth and communities. "Just seeing their backgrounds where these kids came from — they would relay so much information to you, and I was always surprised that would trust me with that information."

Young recalled how one Native student who attended last year's festival approached her and told her, "This is revolutionary — I've never been to an event like this, especially in this area."

Pleased as they were with the first year's festival, they had some obvious improvements they wanted to make in year two. For the first festival, they had concentrated on bringing in relatively well-known Native artists, musicians, actors and others for the presentations and performances, which were extremely well attended. But many of the workshops that took place during the day — events designed to introduce the students to creative pursuits that might fire their imagination — were poorly attended. So the two women said they've chosen to focus more attention on the workshops this year.

"We've developed more opportunities for students to participate," Young said, citing a student film contest that will be judged by representatives of the Sundance Institute's Native American & Indigenous Program. There's also a poetry contest judged by hip hop artist and scholar Frank Waln, and poet and scholar Tanaya Winder of As Us, a scholarly journal that publishes writings from women around the world. Other workshops will focus on hoop dancing, hip hop dancing, youth leadership, Navajo rug weaving and artistic development.

That's not to say the festival won't feature plenty of entertaining presentations and performances. Waln will perform with the Sampson Brothers at 8:30 p.m. Friday, July 31, while a fashion show featuring designer Jolonzo Goldtooth, a Piedra Vista High School graduate whose work is attracting international attention, will be held at 8 p.m. Saturday, Aug. 1. Another concert featuring hip hop artist Christopher Mike-Bidtah, a.k.a. Def-i, and Farmington's Delbert Anderson Trio will be held at a time to be announced.

The festival is staffed entirely by volunteers, and most of the artists and presenters who take part do so either for free or at a greatly reduced rate. Young and Bennett-Begaye said they have stepped up their fundraising efforts this year and expressed their gratitude to the festival's sponsors and partners, but they both acknowledged the need to concentrate on that even more in the future. Young envisions a day when the Survival of the First Voices Festival can attract the biggest names in the Native creative community, and afford to transport them to the Four Corners and provide them with nice accommodations. Once that happens, she said, she and Bennett-Begaye have considered the possibility of staging similar festivals at other locations in the United States and Canada to reach even more Native young people.

"The whole reason we got into this was to develop connections for Native American youth and show them they can have careers in the arts and media by connecting them with veterans (of those industries) who can share their stories," she said.

In one form or another, storytelling is what the festival is really about, Young said.

"A lot of these (artists) were kids just like the ones in the workshops once, and they're telling these kids how they got to where they are," she said. "Even if we touch only one or two kids, it's worth it if we can help them develop a passion for the arts."

A full schedule was due to be posted on the festival website earlier this week.