If you're not playing it, you should be, says former 'Seinfeld' actress and musician

FARMINGTON — Since she turned 5, Heidi Swedberg says, the ukelele has been part of the vocabulary of her family.

If you're not playing it, you should be, says former 'Seinfeld' actress and musician 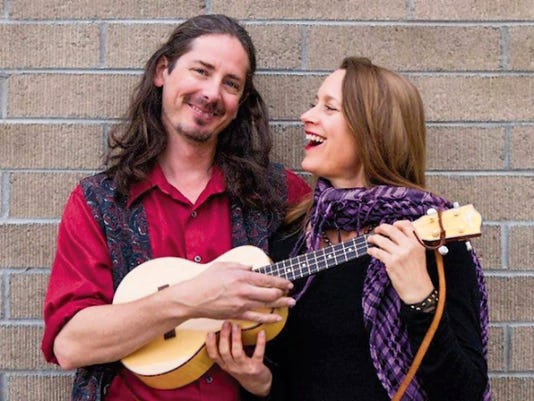 FARMINGTON — Since she turned 5, Heidi Swedberg says, the ukelele has been part of the vocabulary of her family.

Naturally, it all started one Easter.

The Los Angeles-based actress and musician — best known for her role as Susan, George Costanza's ill-fated fiancee on the NBC sitcom "Seinfeld" — remembers the kids in her family eagerly digging into their Easter baskets one holiday morning. Nestled in the green plastic grass among the gooey Peeps and the creepy hollow chocolate bunnies and the cream-filled eggs, they each discovered a small, four-stringed instrument that resembled a guitar. Swedberg and her siblings — who grew up singing in the church choir and taking piano lessons — quickly took a shine to their instruments, figuring out four or five simple chords and banging away on them endlessly.

What they may have lacked in talent, they made up for with enthusiasm, apparently.

Still, that experience — which Swedberg recalled with obvious fondness over the telephone from Los Angeles last week — was the foundation of her lifelong love affair with an instrument that the uninitiated often regard in less-than-serious terms.

So if you're one of those folks who roll their eyes and smirk whenever they see, hear or hear about a ukelele, Swedberg — who will be one of the featured instructors and performers at the inaugural Rocky Mountain UkeFest this weekend in Durango, Colo. — urges you to think twice before you dis her beloved instrument.

The humble and oft-maligned ukelele, she believes, is actually a community-building tool, a sort-of everyman instrument that can lead us to rediscover the joys of group music making.

"More and more, the thing that drives me is to urge people to engage and participate and allow themselves to play and make music that has nothing to do with sounding good," she said. "What I love about the ukelele is that it's such a simple instrument."

Swedberg shares her fondness for the ukelele with her husband Daniel Ward and their friend John Bartlit. All three are New Mexico natives — Swedberg moved to Albuquerque from Hawaii at and early age and grew up there, eventually attending the University of New Mexico — and perform together as the Smoking Jackets, a ukelele-based band that performs at uke festivals around the world. They offer personal instruction at festival workshops and try to impart the idea that you don't need to be a whiz to get a kick out of playing the ukelele.

Swedberg began serving as an instructor when she organized a ukelele project at daughter's school 10 years ago. With the kids all gathered around her, Swedberg said she tried to identity a simple song she believed everyone would know so she could teach them the chords. She settled on "Down in the Valley," a traditional American folk song that has been a staple of elementary school music classes for decades, and was shocked when the students responded to her suggestion with blank faces.

"You just don't realize the folk tradition is dying," she said. "From that, I learned a lot about the state of oral tradition. Music has changed so much because it's gone from being a means of communicating and being a part of everyone's life to something we consume. You're either a consumer or a producer."

That experience made Swedberg realized the time-honored tradition of parlor music in America — when families or even groups of families would gather for sing-alongs, accompanied by an orchestra of whatever instruments were available, played by individuals of varying proficiency — had long ago become extinct. Swedberg bemoaned that fact, citing her belief that such gatherings are a very important part of being human.

She's hopeful the ukelele can help fill the void created by the passing of that era, and she sees evidence of that every time she makes an appearance at a uke festival.

"There are a lot of people who think, 'I'm not a musician,'" Swedberg said, describing the reluctance she often sees in workshop participants who pick up the instrument for the first time. But when she shows them a couple of simple chords and gets them strumming along to "Singin' in the Rain" a short while later, she is frequently rewarded with looks of delight and joy, she said.

Swedberg said it is addictive for her, as an instructor, to see that.

"It's like watching the door open and watching the light go on," she said. "It thrills me to be able to facilitate that."

That's exactly the kind of scene festival organizer Denise Leslie hopes to see duplicated often at this weekend's workshops. She took up the ukelele five years ago and now can't get enough of it, she said, explaining that she makes a point of sitting on the front step of her home each weekday morning with her instrument and a cup of coffee and her puppy, soaking up a few moments of ukelele-induced peace before beginning her workday.

"I am obsessed with the ukelele," she said. "It scares my husband quite a bit."

Leslie has modest hopes for her nascent festival, explaining she'll be happy if 30 to 50 people show up to take part.

"We wanted people to experience a more intimate kind of thing," she said, though she emphasized this is not the kind of music festival where visitors are expected to show up, sit down, shut up and listen.

"It's really geared toward and targeted to the avid player or someone who wants to learn," Leslie said. "We expect to have all kinds of players."

A Smoking Jackets concert on Saturday, July 11 is the only real listening experience planned for the festival, but Swedberg said even that event is largely designed to break down the wall between audience and performers. She said the group's repertoire begins with familiar material designed to make listeners feel comfortable before taking a hard left into a jazz tune or a fast samba — songs that she hopes will encourage listeners to open their minds, and ears, and perhaps reconsider their definition of ukelele music.

Swedberg said she's seen a virtual explosion of interest in the ukelele in the past few years. As recently as five years ago, she said, there was only a handful of such festivals; now, they're almost omnipresent.

But the real measure of the instrument's surging popularity, she said, is what she sees every time she steps into McCabe's Guitar Shop in Santa Monica, Calif., perhaps the most famous musical instruments store in America. Swedberg has been teaching the ukelele at the shop for 10 years. When she started, she said, the store's inventory of ukeleles consisted of four or five cheap models. Now, it has two and a half walls filled with ukeleles of all styles and price ranges, and for every would-be Eddie Van Halen or Jimmy Page she sees leaving the shop with a Fender Stratocaster or Gibson Les Paul in tow, she sees at least five people taking home new ukeleles.

"Ukelele festivals are about people getting together, playing together and leaving with something more than just a great listening experience," she said. "That's the reason why it makes the most sense to me."

What: Rocky Mountain UkeFest
When: Friday, July 10 and Saturday, July 11
Where: Various venues in downtown Durango, Colo.
For more information: Visit rockymountainukefest.com or call 970-403-1590
CONNECTTWEETLINKEDINCOMMENTEMAILMORE
Read or Share this story: https://www.daily-times.com/story/entertainment/2015/07/08/actress-musician-heidi-swedberg-teaches-performs-at-rocky/32025295/
Share your feedback to help improve our site experience!