FARMINGTON — On the morning of Memorial Day, members of the Upper Fruitland Veterans Organization ceremoniously... 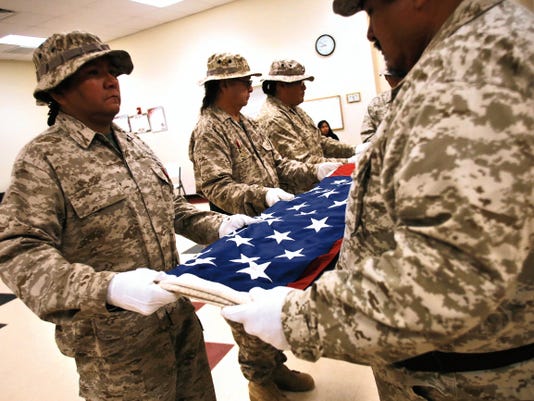 FARMINGTON — On the morning of Memorial Day, members of the Upper Fruitland Veterans Organization ceremoniously refolded flags to be presented back to the families of fallen veterans, one of several local events that honored the men and women whose lives were lost in combat.

Shiprock resident Joe Cambridge Jr. also presented his father's flag for refolding. Sgt. Joe Cambridge Sr. served in the U.S. Army during Desert Storm. The veteran's son said the flag had not been folded for some time, and he brought it in to honor his father.

The Veterans of Foreign Wars Post 2182 Honor Guard opened the ceremony with the posting of colors, and chaplain Jim Rixon read the invocation.

People in attendance recited "The American Creed" with the Daughters of the American Revolution's Desert Gold Chapter and hummed along to Johnny Cash's "Ragged Old Flag."

Mike Padilla, a former Aztec mayor and Vietnam War veteran, joined several other motorcyclists in a group ride from Four Corners Harley-Davidson, 6520 E. Main St. in Farmington, to the Healing Field flag display at the Boys and Girls Clubs of Farmington, 1825 E. 19th St., and finally to the service at Memory Gardens.

"This is what we do on Memorial Day," he said.

Farmington resident Martin Sanchez attended the ceremony at the cemetery and afterward visited the site where his father and mother was interred.

Sanchez said his father, Teofilo Castillo-Sanchez, died in May 2014 but was interred Sunday. Castillo-Sanchez was a U.S. Army veteran who served during the Korean conflict. His unit also participated in the nuclear testing exercises at Camp Desert Rock, Nev.

"He was one of the men in the trenches," Sanchez said of his father. "They told him to run into the testing site, and that is what he did. He is my hero."

At midday, 500 U.S. flags snapped in the brisk breeze at the Healing Field at the Farmington Boys and Girls Clubs.

The display was organized by volunteers from the San Juan County East Rotary Club, the Blue Star Mothers and other organizations throughout San Juan County.

Judye Leczel, president of the local chapter of Blue Star Mothers, said the flags would be taken down during a closing ceremony Monday evening, but the Healing Field would return again next year.