Voters will head to the polls Tuesday to determine Navajo Nation presidency, election...

Voters will head to the polls Tuesday to determine Navajo Nation presidency, election... 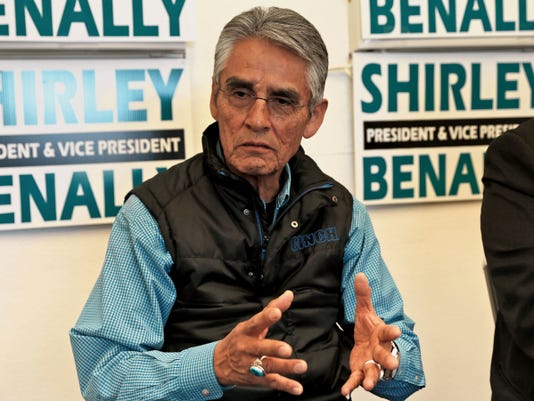 WINDOW ROCK, ARIZ. — Navajo Nation voters will cast ballots Tuesday to select a tribal president and fill six vacancies on the Navajo Board of Election Supervisors.

On Monday, the Navajo Nation Supreme Court ruled that a lower court's order to suspend the special election was null and void.

Navajo Election Administration Executive Director Edison Wauneka said he was pleased with the high court's decision in an interview after Monday's court hearing.

"All the work we put into (it), at least, it's not going to waste and also the money that we put in. So for that, I'm glad the decision is to continue the election," Wauneka said.

He said all 110 chapter precincts will be open from 6 a.m. to 7 p.m. Tuesday and people can contact either the main election office in Window Rock or the agency election offices if they have questions.

Joe Shirley Jr. and Russell Begaye are vying for the tribal presidency and in the Northern Agency, Shiprock residents Sammy Ahkeah and William Lee face off for a seat on the election board.

Wallace Charley, one of the former election board members who filed the petition to suspend the special election, attended Monday's hearing.

"This was expected," Charley said, adding he thinks the high court is continuing to create laws rather than interpret them.

He said the special election is not "according to the election laws" and he will not be casting a ballot.

The high court convened on Monday in Window Rock, Ariz., to hear arguments on a writ of superintending control filed by the election administration Monday morning against the Window Rock District Court.

According to the court document, the election administration was requesting the high court to "immediately quash" the order made Friday by District Court Judge Carol Perry.

Perry ordered the special election be suspended after four former election board members filed a petition on April 13.

The group argued that the election administration was violating tribal law by holding the special election before allowing voters to weigh in on a referendum that could amend the Navajo and English language fluency qualifications for the president and vice president.

On March 13, the Navajo Nation Council added the referendum as an amendment to a bill that requested $317,891 in supplemental funding for the election administration to conduct the special election.

The amendment also instructed that the supplemental funding be used to conduct the referendum followed by the special election. It was signed into law by tribal president Ben Shelly on March 16.

The council and president's actions were challenged and the Supreme Court ordered the special election to proceed as scheduled in an order issued on March 20.

The justices determined that the district court was unable to justify its authority to halt the election and sufficient evidence was not provided.

"The personal desires and feelings of a moving party is not considered evidence," Yazzie said, adding that the former election board members "failed" to prove the injury they would suffer if the special election took place.

"An injunction is unwarranted," he said.

Despite the former election board members' arguments, there is existing law that determines a candidate's qualifications that cannot be changed in the middle of an ongoing election, Yazzie added.

"The district court, in disregarding the statutory mandates of an ongoing election, is not only an egregious abuse of discretion, it is reckless disregard for existing laws," Yazzie said.