Injured Navajo police officer to be released from hospital next week

Injured Navajo police officer to be released from hospital next week 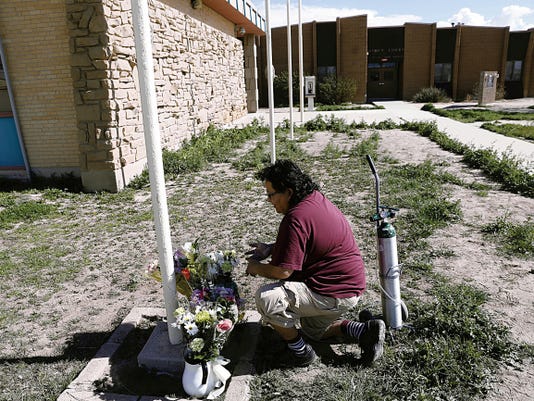 Lorenzo Lee places flowers on March 20 at the base of a flag outside the Navajo Nation Division of Public Safety's Shiprock District Office.(Photo: Daily Times file photo)

FARMINGTON — Officer James Hale, one of two Navajo police officers injured in a March 19 shootout in Red Valley, Ariz., is expected to be released next week from the University of New Mexico Hospital in Albuquerque, according to a Navajo Nation official.

Deswood Tome, President Ben Shelly's chief of staff, said Friday that Hale's family has requested that the injured officer's medical condition not be released. Tome said the second officer injured in the shooting, Herbert Frazier, has been released from the hospital and is recovering at home.

Hale and Frazier were wounded the night of March 19 in a shootout with Justin Fowler, 26. on Navajo Route 13 in Red Valley, Ariz. Fowler and a third officer, Alex Yazzie, were killed in the shooting.

FBI agent Perryn Collier of the bureau's Phoenix division said Friday an investigation into the shooting is ongoing.

Asked whether the bureau will release its findings, Collier said the wishes of grieving family members will be taken into consideration.

"Publishing the details of an officer's death typically does not result in the honoring of the fallen officer, but glorifying of the misdeeds of the shooter and the encouragement of others to follow the shooter's actions," he wrote in an email.