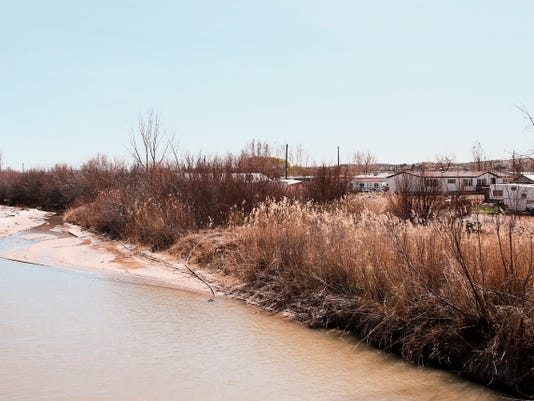 FARMINGTON — San Juan County is trying to disconnect communities from failing sewage systems that studies say could be polluting the area's rivers and endangering residents' health, but the projects are expensive and hard to fund.

In late February, a local study was released that found significant levels of a bacteria in the San Juan and Animas rivers indicating the presence of human waste. Officials involved in the study have said likely causes include leaking septic systems and/or illegal waste dumping, but some want to study the rivers further to more clearly identify the sources.

"If there (were) five of them out there or 5,000 out there (that were failing), we don't know until it's brought to our attention," King said.

County Operations Officer Mike Stark said there have been studies to examine the possibility of providing city sewer service to homes and businesses in the Flora Vista area and in the Lee Acres and Wild Horse Valley community. The studies found health threats related to failing private sewage systems.

King said 2 feet of unsaturated soil will adequately filter buried sewage before it reaches water. But, he said, the county has challenging soils.

According to the preliminary engineering report for the Flora Vista project, some of the community's sewage systems — septic tanks, leach fields and evaporative beds — are failing, and some lots containing systems that aren't failing do not meet the department's regulations.

Unsuitable soils, high water tables, aging systems and irregular pumping is causing the systems to fail, according to the report.

The conditions may threaten the public's health, according to the report.

The preliminary engineering report for the Lea Acres and Wild Horse Valley project found that the area's soil does not generally support septic tanks and leach fields, and systems are installed above the ground because of the high water table.

Many homes in the area use private sewage systems, such as septic tanks or leach fields, and they are failing, according to the report.

County Executive Officer Kim Carpenter said deputies have investigated canyon communities of more than 20 mobile homes illegally connected to septic systems. Stark has said squatters living in encampments turned over the body of a Volkswagen Beetle and used that to collect their sewage.

"I think we're doing a better job with the illegal systems, although they're out there," Carpenter said. But "in addition to that, we still have a lot of challenges with failing systems."

This month, the county commission approved a nearly $750,000 loan-grant agreement with the state to decommission a waste water treatment plant in Harper Valley. It also awarded a $2.6 million bid to decommission a sewage lagoon in Kirtland.

The waste water treatment plant does not comply with EPA standards, and the lagoon, which sits just north of the San Juan River on County Road 6259, has almost overflowed twice in the past five winters.

But connecting 176 homes in Flora Vista to Farmington's plant would cost $9.1 million, Stark said. The total project would cost $12.8 million, he said.

And connecting homes and businesses in the Lee Acre and Wild Horse Valley community, which is estimated to contain at least 3,150 people, would cost $6.5 million, according to Stark and county documents.

The state last year offered the county a $600,000 grant and a $8.5 million loan for the Flora Vista project, but officials from the Flora Vista Water Users Association, which own and operate the waste water system, said the cost of the loan was too high and declined, Stark said.

Obtaining federal funds, which are no longer earmarked for capital projects, is unlikely, he said.

Ultimately, without state and federal funding, "these projects will have to be locally funded," he said.