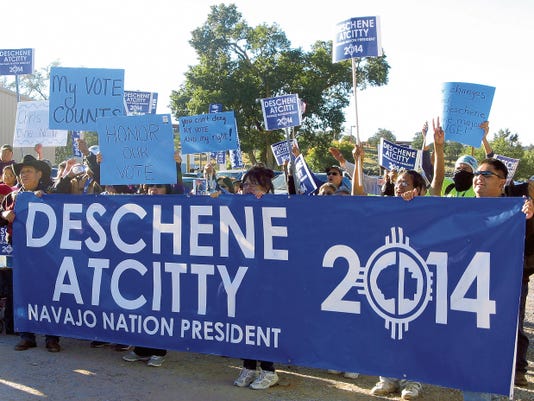 After the deposition, which is scheduled for 9 a.m. Monday in Gallup, the court is scheduled to continue the hearing.

"We will complete this process next week," Nez said before calling for the recess.

The hearing was ordered by the Navajo Nation Supreme Court on Sept. 26, after it returned the case to the lower court to determine whether or not Deschene meets the Navajo language fluency requirements for presidential candidates.

Throughout the hearing, Deschene sat with his attorneys, Jim Barton and Brian Lewis, and Navajo interpreter, Peter Deswood Jr.

Tsosie and Whitethorne sat across the table with their attorneys, David Jordan and Justin Jones.

Among those allowed into the small hearing room were Deschene's wife, Shaun Deschene, and his vice presidential candidate, Fannie Atcitty.

Jordan repeatedly stated that Deschene "disobeyed" the court's order when he first agreed then refused to take a Navajo language fluency test this week.

Nez said the test would have been designed and administered by personnel from the tribe's Department of Diné Education, who have experience in testing the fluency level of Navajo language teachers.

Lewis said Deschene was advised by his previous attorney, Samuel Pete, to participate in the fluency test.

But after Lewis became Deschene's representative on Wednesday afternoon, he advised his client not to take the test.

Since Deschene refused to take the language test, Nez granted an extension to the petitioners and ordered Deschene to undergo the deposition on Monday.

In an interview after the hearing, Jordan explained that Deschene would be "interrogated" in the Navajo language and would be required to respond in Navajo.

"Unfortunately, that's all we'll be getting because he refused to take the test so we don't have that so this is kind of in place of that," Jordan said.

In a statement released Friday afternoon, Deschene said he is qualified to run for the presidency and the 9,831 voters determined his "leadership, experience and fluency was sufficient."

"I want this court case ended, and I want our people to decide. I look forward to an immediate conclusion to these proceedings," he said.

Before the hearing started, a group of Deschene supporters marched into the parking lot of the Office of Hearings and Appeals.

And like the night of the primary election, they chanted "Yéego Chris" and carried a large blue and white banner with Deschene and Atcitty's names on it.

"We're here for support," Tsinigine said about the crowd of approximately 50 people.

"He had close to 10,000 votes. Our votes have to be honored and it's time for new leadership," Tsinigine said.

When asked about the matter of Navajo language fluency being a qualification for the tribal presidency, Tsinigine called it "discriminatory."

Marilyn Watchman, of Fort Defiance, Ariz., walked with her sons, Jeryn Watchman, 13, and Jerrick Watchman, 11, and her granddaughter, Amya Jackson, 3.

Watchman, whose first language was Navajo, said she speaks Navajo to her children and grandchildren, who can understand it but cannot speak it.

"We have a hard time learning our own language. I don't know why they're making a big issue out of it but that shouldn't stop anybody from being president," she said.