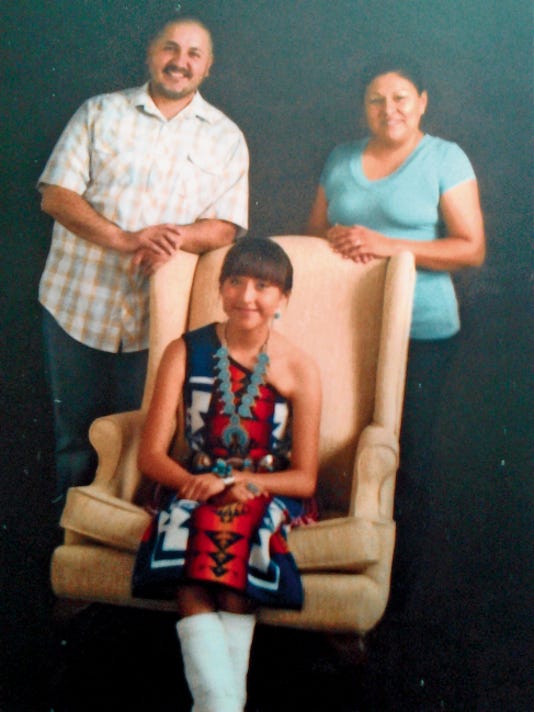 Courtesy of Ida Sahmie Clockwise from left: Geronimo and Andrea Larios and their daugter, Teddi Goodluck, pose for a photo. The 18-year-old from Pine Springs, Ariz., will be the patient during the YeiþÄô BiþÄô Chei ceremony at the Northern Navajo Nation Fair.(Photo: )

SHIPROCK — Eighteen-year-old Teddi Goodluck will be attending the 103rd Northern Navajo Nation Fair in Shiprock — not to see the parade or take in the rodeo, but to be healed.

Goodluck, who is from Pine Springs, Ariz., will spend nine nights in a row in a ceremonial hogan at the sacred Yei' Bi' Chei grounds as part of a Yei'Bi'Chei, or Nightway, healing ceremony traditionally held in the fall and winter during or around harvest time.

The teen was chosen by the fair board as the patient for this ceremony, which is led by a medicine man, or Hataalii, and his helpers who chant over the patient inside the hogan. The nighttime ceremony coincides with the fair and is the first healing ceremony of the season.

The ceremony started Sept. 26 and culminates at dawn on the fair's final day. After sundown on Friday and Saturday night during the fair, groups of masked dancers in colorful traditional costumes personifying gods, also called Yei, dance, shake rattles and chant sacred songs before the hogan.

The first four nights of the Yei'Bi'Chei centers around the creation of a sand painting, with the final five nights devoted to singing and chanting, all in the interest of healing the patient.

Goodluck, a freshman at The University of Colorado in Colorado Springs, has a cleft palate that her family hopes the medicine man will help heal.

The medicine man chosen to lead the ceremony this year is Philip Begay of Ganado, Ariz.

Goodluck's grandmother, Ida Sahmie, said the Yei'Bi'Chei ceremony is a tradition many of her family have experienced.

"Teddi was born with a hole in her mouth that was repaired when she was a baby but it didn't fully close, so we took her to a medicine man who said that she needed a Yei'Bi'Chei," Sahmie said by phone from her home in Pine Springs earlier this month. "When I was little, my grandparents did a lot of that. There was always a Yei'Bi'Chei and everybody was a part of that. It's the biggest ceremony, a very sacred ceremony."

Like her mother and grandmother before her, Sahmie took part as a patient at a Yei'Bi'Chei in the 1990s and said her granddaughter's participation this week is a continuation of the family tradition.

"My grandma taught us about the Yei'Bi'Chei," she said. "It's a holy thing to us and our family."

Since then, Sahmie said she has incorporated Yei'Bi'Chei dancers into her pottery, etching them into the clay in a Hopi style.

But the ceremony is an ordeal that takes a lot of energy, scheduling and money.

"We're getting ready for it. We're getting very busy right now," she said. "We are gathering together all the supplies and food and wood and dishes and things that we'll need before we go to Shiprock."

Sahmie said her family is collecting and paying for enough sheep to give as gifts to the approximately 18 dancing groups that will participate throughout the nine nights. But that is only part of the total cost for the ceremony, which she said will ultimately be around $10,000.

"The medicine man's fee is about $2,750 and the items used consist of seven Navajo Wedding baskets which average in price about $100 to $300 apiece, plus fabric materials ... and other blankets, robes and shawls, which cost like $150 to $230 each," she said. "Some family have lambs or sheep and will donate them for us. We also will bring food and feed the medicine man and his helpers. We prepare the food and we feed people. We'll be camping there and be there the whole ceremony."

Avery Denny, 57, is a Hataalii chanter and singer who teaches at the Center for Diné Studies at Diné College in Tsaile, Ariz. He said that unlike some of the more conventional aspects of the fair, Yei'Bi'Chei is not a spectacle or sideshow.

"(Originally) the Yei'Bi'Chei was not a part of that Shiprock Fair. The ceremony was brought in ... about 70 years ago," Denny said. "What the ceremony focuses on is the harvest time and to be thankful and to renew ourselves using the fruit of the harvest — the corn, the watermelon, the squash — to make that food as medicine, for healing. Then, of course, there is a patient who will be healed with that food."

Denny said he has served as a healer at Yei'Bi'Chei ceremonies for most of his life.

"I was born into it, raised with it, got my medicine and have been doing it for over 40 years," Denny said. "My father and grandfather were practitioners. It was right there in my home. My uncles too — they were my teachers and masters."

Most of the ceremony is private.

"It's constantly going, from dawn all day, take a little break in the afternoon and then at sundown it picks up again," he said. "To a Navajo, they know why they go to these — the sand painting, night singing, basket tapping, the dancing part of it ... the regalia at the closing of the final night. That's what the people witness and what the people see. It's beyond a performance. People need to see it like that instead of like a show.

"There're some things that need to be kept secret and sacred and that's what makes it an authentic traditional ceremony."

Old traditional ceremonies like the Yei'Bi'Chei are in danger of disappearing forever, Denny said.

"The ancient (composition) of the ceremony, we're losing that. Even the symbolic interpretations that are used in these traditions are being lost," he said. "We need to pay attention to what is divine in there, what is sacred in there, because we are losing our ancient ceremonial ways and it is going really fast."