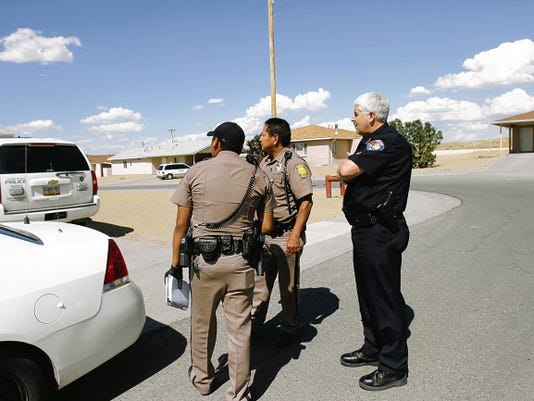 SHIPROCK — Farmington Police Chief Steve Hebbe spent several years as a high-ranking official with the Anchorage Police Department, working to improve relations with the Alaska Natives. That work now continues in Farmington, where Hebbe has made a priority of improving communication and cooperation with the Navajo Police Department.

The Daily Times joined Hebbe on Thursday for the first half of an eight-hour ride-along with Lt. Phillip Joe of the Shiprock division of the Navajo Police Department. In the four hours, the officials traveled more than 130 miles, and the discussion veered from culture to budgetary constraints.

Hebbe said his reasons for riding with Joe were twofold: to get a better sense of the challenges faced by Navajo law enforcement and to show his commitment to improving relations between the two departments. He said he plans to send his younger officers on ride-alongs with Navajo police in Shiprock, and he hopes Joe will respond in kind.

"I don't think our communities understand how much we work together," Hebbe said. "And it's important that they understand."

A good example of that cooperative effort showed itself Thursday morning when a semitrailer carrying hazardous materials exploded near mile post 41 on U.S. Highway 491 in Naschitti.

"That is a perfect example," Hebbe said. "It's already happening."

Joe, a 26-year veteran of the Navajo Police Department, said his department also turned to Farmington when it needed help with weapons maintenance and evidence destruction.

Also, earlier this month, the Farmington Police Department announced it was working on a memorandum of understanding with the Navajo Nation Division of Public Safety that would permit Farmington officers to make arrests on tribal land.

Hebbe and Joe met at a tabletop exercise in April at Newcomb High School. Farmington police officers and SWAT team members met with tribal police to develop a crisis response plan for the school. Hebbe said his department would likely be the second responding agency if such an emergency were to arise.

Hebbe has had limited experience with the Navajo Nation. He arrived in Farmington only five months ago after working for the Anchorage Police Department for 23 years. During Thursday's ride-along, Joe explained to him the definition of Dinè, meaning "the people" in Navajo, and the muddy etymological origins of the word Navajo, which some believe to be Spanish for "horse-thief." Joe also told Hebbe about the spiritual beliefs held by some members of Navajo Nation, including the concept of a "skin-walker," a person with supernatural abilities.

Joe said one of the more unique aspects about law enforcement on the Navajo Nation is the way spiritual beliefs can complicate a criminal investigation.

"People will sometimes claim 'it's black magic,' when we ask them what happened," he said.

Hebbe said on Friday that he enjoyed learning more about the Navajo Police Department's officers and the challenges they face.

"I think it is important that we try to understand their experience, the way they see themselves and their challenges out there," he said.

Hebbe said the most notable challenge is the size of the Nation, which is about as large as Rhode Island, according to Joe.

He also said he was impressed by the officers he encountered.

"They did exactly what I would have done," Hebbe said.

Joe and Hebbe both acknowledged their departments will have to work at overcoming prejudices shared by some members of their respective communities.