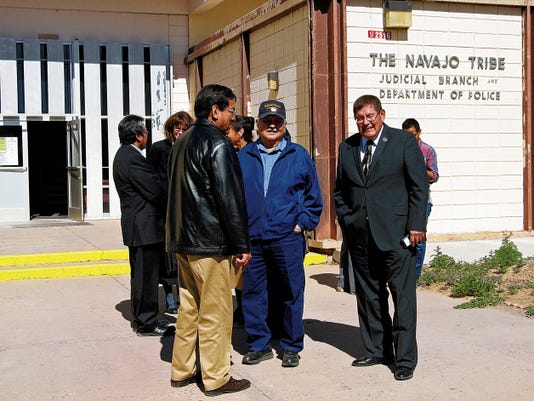 Attorneys from both sides argued they need more time to gather documentation from the council's special session on Friday. The second hearing is scheduled for April 16.

On Monday, Naize filed a request for a temporary restraining order against the 12 delegates and one legislative branch employee because, according to court documents, he considers their actions unlawful, improper and invalid.

At Tuesday's hearing in Window Rock District Court in Window Rock, Ariz., attorneys from both sides told Perry they were only able to submit audio recording from the special session.

Perry had requested they submit the recording and copies of the transcripts from the session, an account of the presence and absence of the members who constituted a quorum and the identities of those who entered and exited the council chamber.

Attorney Brian Lewis, who is representing Naize, explained on Tuesday that legislative services employees were still completing transcripts from the session. He said they worked until 1 a.m. Tuesday but did not complete the work in time for the morning's hearing.

The April 16 hearing will also address Naize's request on Monday to disqualify the attorneys for the 12 delegates and one employee, who are represented by Navajo Nation Attorney General Harrison Tsosie and Navajo Nation Department of Justice Attorney Henry Howe.

Legal counsel for the delegates asked Perry to dismiss Naize's request for a temporary restraining order because they say it was not properly filed using the tribe's Sovereign Immunity Act, which contains the legal format for notifying the tribe when there is an intent to sue. That format includes providing a 30-day legal notice, listing the name of each plaintiff and each defendant, and listing the nature of all claims for relief.

"We are all relatives, like it or not, and that's how we were taught. In that regard, I expect us to treat each other well," Perry said after the court convened just after 10 a.m. Tuesday.

Naize was present at the hearing and sat next to his attorney.

The request for a temporary restraining order was filed against the eight delegates and Platero, as well as Delegates Joshua Lavar Butler, Lorenzo Curley, Jonathan Hale and Danny Simpson.

After hearing Perry's order to have both parties submit additional documentation, Lewis said it would harm the Navajo people because one of their elected leaders is prohibited from his office.

"The Navajo people have not spoken to you personally," Perry said.