Window Rock, Ariz. — A top leader of the Navajo Nation has pleaded not guilty to charges that he allegedly... 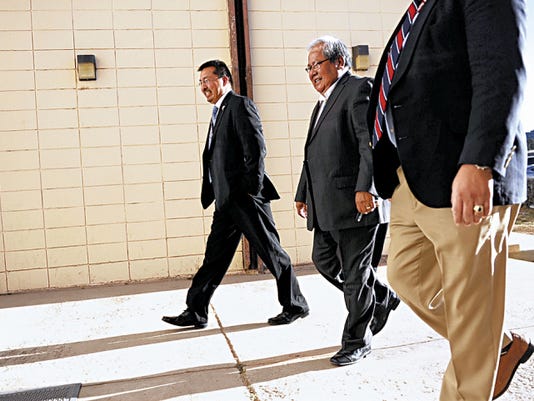 Window Rock, Ariz. — A top leader of the Navajo Nation has pleaded not guilty to charges that he allegedly misused discretionary funds.

Navajo Nation Council Speaker Johnny Naize was arraigned on Tuesday in Window Rock District Court in Window Rock. He was charged with one count of conspiracy and 10 counts of bribery in criminal complaints the tribe's special prosecutor filed in December.

"Not guilty, your honor," Naize said after Perry asked him for his plea to each charge.

A pretrial hearing was not set, but attorney Marc Lowry, who represents the special prosecutor, said the two parties would meet to schedule a date.

Naize has been serving on the council since 1999. He represents Blue Gap-Tachee, Cottonwood-Tselani, Low Mountain, Many Farms and Nazlini chapters in Arizona. He was reelected to serve as speaker in January 2013.

Also appearing in court on Tuesday was former speaker Lawrence T. Morgan, who pleaded not guilty to one count of conspiracy and six counts of bribery.

Morgan sat without an attorney, and Perry informed him of his right to obtain counsel or have one appointed by the court.

As Perry read the criminal complaint for the conspiracy charge, Morgan stated he read and understood each complaint and then requested to waive reading each one by the court.

The pretrial date for Morgan is scheduled for 9 a.m. on April 9 in Window Rock District Court.

Morgan represented the chapters of Iyanbito and Pinedale in New Mexico from 1999 to 2011. He is the only delegate to serve four terms as speaker.

Arraignments were also scheduled for former delegates George Arthur and Lena Manheimer, who did not appear in court.

Lowry told the court that Navajo Nation Police Department staff made "good faith" attempts to deliver summons to Arthur and Manheimer, but they could not be located.

"Those attempts have been unsuccessful," Lowry said.

Arthur and Manheimer were each charged with one count of conspiracy and six counts of bribery.

Arthur represented the New Mexico chapters of Nenahnezad, San Juan and Tiis Tsoh Sikaad from 1999 to 2011 and served as chairman of the former Resources Committee. The criminal complaints states Arthur issued $25,900 in assistance to family members of current and former delegates. In return, those delegates issued $25,900 in assistance to Arthur's family members, the complaints say.