KIRTLAND — Jason and Rebekah Oberholser are on a mission to feed and help others in need. 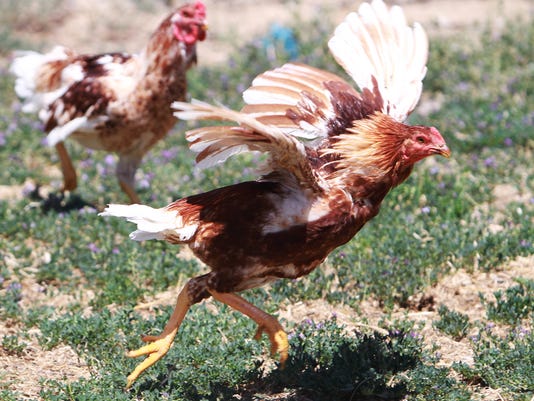 What: The Aztec Farmers Market

When: 4:30 p.m. Wednesdays through October

For more information on Jabek Ranch, call 505-592-2551 or email jroberholserfam@gmail.com.

KIRTLAND — Jason and Rebekah Oberholser are on a mission to feed and help others in need.

From their backyard livestock farm in Kirtland, they have raised sustainable, almost entirely natural meat since they moved from Pennsylvania four years ago.

A few weeks ago, Jason Oberholser expanded his farm's reach and began selling his pasture-raised chicken at the Aztec Farmers Market. On his second Wednesday, he sold out his entire supply.

The couple moved across the country to work on the Navajo Nation on behalf of their church, Brethren In Christ World Missions, a religion that emphasizes a no-frills, back-to-basics approach to spiritual belief with agrarian roots.

The Oberholsers represent a simpler and sustainable approach to the land and life.

From their modest Kirtland home, the couple homeschools their four children, ages 1 to 6 years, using their farm, which also doubles as a playground and classroom. The farm is called Jabek Ranch -- a combinations of Jason's and Rebekah's names.

The couple's four children crawl, tumble and dance through the family's double-wide modular trailer home and spill into the yard full of rabbits, chickens, turkeys, goats and sheep.

"When we slaughter an animal here, all of our kids get excited and aren't shy or unaware of the process this lifestyle offers," said Jason Oberholser. "They're lovin' it. They get an anatomy lesson. It's a natural part of life for them."

After growing up working on his uncle's dairy farm and earning a degree in dairy cattle production and management, Jason Oberholser knew his life would be dedicated to his faith and farming.

At Jabek Ranch, maximizing the potential use of space and materials also comes naturally. With less than an acre to raise animals, the family make use of every available square foot.

"We try to utilize what we can and do it simply," said Jason Oberholser. "A lot of our ideas come from my wife's family, who owns a dairy farm in Pennsylvania, and a big influence from a Virginia farmer and writer, Joel Salatin."

Jason Oberholser owns a dog-eared copy of Salatin's 1998 book, "You Can Farm: The Entrepreneur's Guide to Start & Succeed in a Farming Enterprise," a roadmap to small-scale, alternative farming that tries to closely emulate the animal's natural environment.

And while the Oberholsers' farm isn't certified organic, Jason Oberholser believes his meat products are as good or better than certified organic items because he raises his animals as closely as possible to their natural environment, doesn't use any pesticides or hormones in the supplemental feed he makes and only sells his products locally.

"In our culture, we have allowed our food consumption to go the way of standardization. There's something lost in that -- the personal connection," he said. "I want to have a personal relationship with our customers so they can see where their food comes from, not frozen off a truck from California."

A big component of that is applying Salatin's method of daily changing the pasture space on which the animals graze. Using moveable, floorless field shelters that afford the turkeys and chickens complete exposure to the grass, the animals do not stay in one spot for very long, allowing their droppings to fertilize the soil they vacated the previous day.

The enclosures provide shade on one side and only chicken wire to allow for sunlight and fresh air on the other. Like the goat pens, chicken coops, tools and materials around his farm, they are almost entirely repurposed scrap metal, wood pallets and other people's junk that Jason Oberholser finds a way to reuse.

Just off his back porch stands a curious tower he calls his "hillbilly rabbit condo," an open-air rabbit warren he fashioned by stacking a dozen hollowed out air-conditioning window units. With another unit, he made his own feather-plucking machine. Orange road cones nearby, inverted and nailed to a workbench, hold the poultry during butchering.

A less visible but no less important component of the farm is outreach. On Fridays at the Navajo Brethren in Christ Mission near Bloomfield, Jason Oberholser holds a Bible study class for men in an alcohol treatment program called Overcomers.

He helps people not only through the church and in the treatment program, but also at the ranch. Over the years, Jason Oberholser estimates that he has offered shelter, food or money to at least 30 people in exchange for work at the ranch.

"Some work for an hour or so for a meal or lodging for the night, while others help multiple days for pay. I can't say how many people have actually learned anything from spending time with us," he said. "But one thing I do know is that each of those people were definitely exposed to a farming environment and to how a healthy family operates."